"A fiend whose tough carapace protects it from Normal Attacks but leaves it vulnerable to magic. Its attacks are straight-forward and unrelenting."

Defense Up
Nothing to learn

"A fiend whose tough carapace protects it from Normal Attacks but leaves it vulnerable to magic. It sometimes performs an irritating attack that destroys Phoenix Downs."

Defense Up, Shatter Phoenix Down
Nothing to learn

Bicocette does not have a weakness and its Defense stat is very high. However, it has low HP and Magic Defense, so casting magic is the best option for defeating it.

Of all the roster of Battle Simulator, the Wall Ring stolen from the Oversouled Bicocette is the most expensive item that can be sold at the beginning of the game. The player can keep defeating the fiend until it Oversouls, and then use Rikku's steal and quickly escape. This can then be repeated to easily earn plenty of gil from selling the rings.

Bicocette was created from the spirit of a bandit who was betrayed by his associates while claiming to know how to use the Doom spell. However, upon mastering the Doom spell, the Bicocette's intent to scare his killers ended up being plain murder to his horror before finding himself attack by the Doom specter.

You guys are lucky. There aren't many Bicocettes in Spira that can use Doom. Why the face? Don't believe me? You think I'm a liar, don't you? You wanna see it? Ahh, well I can't just show it to you for nothing!

Well, I guess it's not nice to keep you in suspense for too long. Just between us, back when I was a petty thief, I made a deal with the Angel of Death. "I'll lend you my powers. Go out and reap for me many human souls." ...is what he said. I gladly made the deal. I mean, I can just take out anyone I don't like, right?

So I went wild! But one day I messed up and dies, and my partners sealed my powers. But they forgot to send me to the Farplane! The nerve of them! So anyway, I can't use Doom right at this moment, but I'll get it back, I swear!

I can feel it! The seal will be broken soon! I'll have my powers back! I'll make my old associates pay for envying me and taking away my power! 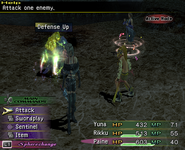 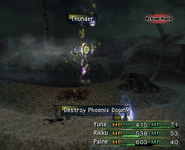