This is our ark—our haven. It will be called 'Bhunivelze'... and it shall be the new home for the human race.

Bhunivelze is an inaccessible location from Final Fantasy XIII-2, which also appears in Lightning Returns: Final Fantasy XIII. It is an enormous man-made spherical ark that floats due to the five Graviton Cores used in its structure. It was constructed to imitate Cocoon.

The Brain Blast quiz reveals the outer shell of Bhunivelze is made of adamantoise shell.

This project began based on predictions that the crystal pillar supporting Cocoon will eventually collapse. A proposal to re-float the current Cocoon was also considered but subsequently rejected due to the necessity of reviving the fal'Cie to provide a compatible power source.

Construction of the man-made Cocoon began in 10 AF, and is scheduled for completion in the year 500 AF.

After learning of Cocoon's fate through the Oracle Drive in 10 AF, Hope decides to use the Academy's resources to devise a way to stop or minimize the damage Cocoon's destined fall could cause and save the populace. Hope initially proposes the Proto fal'Cie Project to create a fal'Cie to keep Cocoon afloat in the sky, as was the case when he lived in Cocoon.

Hope witnesses a prophecy in the Oracle Drive that depicts Serah Farron in the Augusta Tower at 200 AF yelling at him for the Proto fal'Cie Project he would have devised in 13 AF. Hope abandons the Proto fal'Cie Project and concludes a new Cocoon must be man-made, and begins the New Cocoon Project. He deems a new Cocoon would be required to avoid the mass extinction event that would be caused by the predicted second fall of Cocoon in 500 AF, as the world's population would not be on Pulse when the fall occurs. Caius Ballad exploits this in a plan to crash the new Cocoon with the old one in 500 AF when Hope prepares to launch it into the sky.

Lightning alerts Serah, Mog, and Noel to Caius's plan in New Bodhum in 700 AF, and they stop him. When Serah, Noel and Mog return to Academia 500 AF from Valhalla, Cocoon's crystal pillar crumbles but the crystal holding Vanille and Fang is removed from it in time by Sazh Katzroy.

Cocoon falls harmlessly thanks to another of the Academy's inventions, a metashield. Bhunivelze rises, but with Etro's death, the chaos of Valhalla emerges into Gran Pulse and consumes Bhunivelze.

In the paradox ending, "The Future is Hope", Bhunivelze appears behind Academy headquarters in Academia at 4XX AF.

In the aftermath of the mortal realm and the unseen realm merging into Nova Chrysalia, Bhunivelze floats in the sky of the newly created world with a ring that gives it a halo. After many years, people who settled in Nova Chrysalia forget Bhunivelze's original purpose, or have their memories remolded to not remember it, and consider it a moon. Inside, there exists a space where time does not flow called the Ark from where Hope helps Lightning on her journey to save the world. The Ark acts as a stable base for her where she can restock on items and rest.

On the final day before the Apocalypse, Vanille and her friend Fang guide the souls of the dead to the Ark so they can travel to the new world as the old world is destroyed, fulfilling Bhunivelze's original purpose as the humanity's salvation.

After the souls of humanity have journeyed to the new world where everyone starts their lives anew, a reporter named Aoede begins investigating stories of people having memories of a past life in another world. Her interviewees reveal that back in the old world the fal'Cie Pandaemonium acted on its own and cultivated the lands of Nova Chrysalia and constructed cities, the first being Luxerion, while its second construction was Yusnaan where it established a supply chain.

At first people were reluctant to use the fal'Cie's offerings, but the Counseil de Renaissance, an organization founded at the beginning of the world's decay whose focus was to help maintain mankind's survival, decided that the people should move to Nova Chrysalia, as staying within Bhunivelze was seen as hampering humanity's chance of survival. Only a small team of scientists remained in secret to conduct research into Chaos, eventually discovering it can be controlled via Antimatter Manipulation Principle. This research was never completed, however, as the scientists disappeared. As Hope began investigating the incidence he lost his mind to an illusion of Lightning that led him back to the manmade Cocoon. Hope was enslaved by the god Bhunivelze and remained within the Ark never to be seen again. Concept art of Bhunivelze under construction. 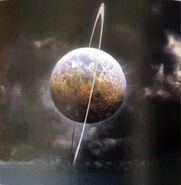