Non-player character
Bhakti is a robot with highly functioning AI in the Final Fantasy XIII trilogy.

In Final Fantasy XIII, Vanille had said model as a pet. It can be found on the second floor of a house in the Dilapidated Dwelling in Oerba, and once repaired, it informs the party of secrets in Gran Pulse. Two of the game's achievements are obtained through Bhakti.

In Lightning Returns: Final Fantasy XIII, a Bhakti is found in the underground ruins of the Dead Dunes and is used for ruin exploration.

Bhakti is a robot with very high-functioning AI. Such robots are often found amid the ruins of ancient towns and settlements, and those that are in good condition are retrofitted and put back into service as exploratory rovers, capable of navigating the ruins of the Dead Dunes.

Vanille kept one such robot as a pet, 1,700 years ago, in her first life. But that is a tale of Oerba, Vanille and Fang's home village from the days when the world was called Gran Pulse.

The party comes to Oerba to seek for a way to remove their l'Cie brands, but find the village abandoned and in ruins. They come across Bhakti, and Vanille recognizes it as her old pet robot, but it is broken. Sazh can fix it if they find the correct parts, and after scouring the village ruins, they find the material needed to fix Bhakti. After being fixed Bhakti provides the party with information on Gran Pulse. The party leaves Bhakti in its dwelling when they move on.

Multiple Bhaktis appear in Oerba's Village Proper area, from as few as two in 200 AF to up to four in 400 AF. Their only function appears to be riding around the area, possibly analyzing data, while beeping.

Humans are a kind species. I truly did love these human companions of mine.

While descending the Temple Ruins of the Dead Dunes, Lightning encounters a depleted Bhakti in a secluded room who requests her to find him fuel. After Lightning obtains the fuel and gives it to Bhakti, the robot is energized and implores Lightning to inspect the nearby sealed door so he can find his friends. Upon unsealing the door, Lightning encounters human skeletons, presumably the people who brought Bhakti to the ruins. She finds a letter among the remains and discovers the group was trapped within the room, starving to death and requesting to anyone who finds them to give them a proper burial and that if Bhakti had stopped functioning, to bury it with them.

In the event that Bhakti was still functioning they ask it be repaired and found a new home as they had valued Bhakti as their ally, friend and companion. Bhakti remains curious about his friends, commenting on how skinny they've gotten and how the climate of the desert area has robbed them of their moisture. Lightning explains to a confused Bhakti his friends have passed away, and Bhakti realizes humans need constant refueling, becoming ashamed its friends must have thought it had abandoned them. Lightning reassures Bhakti his team knew it was doing its best to save them, with Bhakti thanking Lightning for the sentiment and expressing how much he had loved his companions. Bhakti malfunctions and Lightning collects its soul. Curious, Lightning and Hope discuss the potential of inanimate objects having souls and Hope speculates the bonds formed between Bhakti and its team allowed it to express feelings reminiscent of a soul. 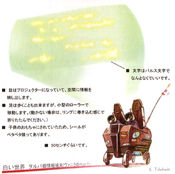 Repairing Bhakti is a sidequest first available when the party visits Oerba in Chapter 11. There are five parts scattered across town that must be obtained for Sazh to fix Bhakti. The parts can only be found when the player visits Bhakti in the Dilapidated Dwelling before completing Orphan's Cradle.

The parts are found in the following locations:

Once all five parts are found and the player returns to Bhakti, Sazh will repair the robot.

Bhakti gives the player titles depending on how many steps the player has walked on Gran Pulse. The titles earn the player extra items and components. The prizes are cumulative, meaning the player will always receive all the items for lower titles, even if they earn a higher rank.

In addition to awarding the player with titles, items, and trophies, Bhakti offers the player a random "bonus byte" whenever they examine it.

The Life of a Machine[]

Entry 1 - Quest Begins
In an isolated chamber of the Sacred Grove in the Temple Ruins, Lightning finds an exploratory rover bot called Bhakti. It seems he is almost out of fuel, but Lightning might be able to help. This quest has a time limit.
Entry 2
The energia Bhakti needs can be found in three locations: Tobias's General Store in Ruffian, next to the Shrine of the Tablet in the Grave of the Colossi, and the foot of the Oasis Lighthouse. There might be other supplies elsewhere, too. Once Lightning has three energia of fuel, she should take them to Bhakti.
Entry 3 - Quest Complete
Fully mobile once again, Bhakti finally manages to open the chamber where he believes his comrades are waiting for him. But those comrades are not robots; they are humans, and long dead. When Bhakti learns his friends cannot be repaired, his own systems shut down and he falls silent for good. Who can say if machines have souls? What is clear, is that in his final moments, Bhakti knew what it meant to be human.

In Sacred Grove area of the Temple Ruins, Lightning runs into Bhakti and must bring three Bhakti's Oils to it. If Lightning takes too long she will fail the quest. Bhakti gives clues on where to find them, but the fastest way is collecting three oils from Oasis Lighthouse. When Bhakti is oiled up Lightning must examine the door it points to to find the pile of bones in the next room. The bones hold 1200 gil, Bhakti's Oil, and a Pilgrim's Crux. Talking to Bhakti again completes the quest.

[view · edit · purge]Bhakti is a Hindu principle that posits that through personal devotion to a deity, salvation can be achieved. This refers specifically to salvation from samsara, an endless flux of becoming and perpetual wandering.

The word Bakti in Malay and Indonesian language (same pronunciation), and Bhakdi in Thai language, mean "to devote to".