Duke Bestrald Larg, or Prince Bestrada Larg, is one of two rival dukes seeking power in Ivalice, the other being Duke Goltanna.

Larg is the Duke of Gallionne and is represented by the White Lion crest. He is defended by the Order of the Northern Sky knights. He is the brother of Queen Louveria and one of her staunchest supporters. His birthday is August 11.

Upon Barbaneth Beoulve's death, a noble and a hero of the Fifty Years' War, Larg took his eldest son, Dycedarg, as his personal assistant. The next eldest Beoulve, Zalbaag, became the leader of the Order of the Northern Sky. When Ramza, the youngest of Barbaneth's male heirs, defies Dycedarg's orders and rescues Marquis Elmdore from the rebellious Corpse Brigade, Larg commends Ramza despite Dycedarg's objections.

Larg knew about the kidnapping of Princess Ovelia, which was set up using Northern Sky knights disguised as knights of the Order of the Southern Sky to frame Goltanna. In truth, Dycedarg was behind the kidnapping, even hiring Ramza's childhood friend Delita Heiral to carry it out, though he was unaware Delita was a double-agent for Goltanna. Larg has much to gain in Ovelia's death, as this would mean the young Prince Orinus would become king, and Larg becoming regent. If Ovelia becomes queen, Goltanna would likely end up as regent instead.

Following the king's sudden death both Larg and Goltanna attempt to enthrone their candidates, and the War of the Lions breaks out. It culminates into the Battle of Fort Besselat, where the Northern Sky Order besieges the Southern Sky's primary stronghold. During the battle, an engineer named Barich working for the Church of Glabados, that is secretly orchestrating the war for its own purposes, spreads Mossfungus poison throughout the Northern Sky ranks. This weakens the knights, including Larg and Dycedarg.

Dycedarg, less affected than the duke, discovers Larg lying atop a hill overlooking the garrison. Larg would have recovered, but Dycedarg betrays him, stabbing him with a dagger. As Larg dies, he reveals Dycedarg engineered Barbaneth's death, leading Zalbaag to question Dycedarg's intentions.

A leader in command of several hundred knights, holding a title high even among the aristocracy.

Larg appears as a card in the Ivalice Special Arena has a limited-time special arena with eighteen floors. 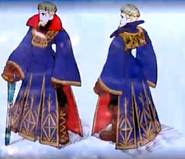 Earlier artwork shared by Yasumi Matsuno on May 19 2018 in a livestream.
Final Fantasy Tactics jobs and abilities
Português do Brasil
Community content is available under CC-BY-SA unless otherwise noted.
Advertisement