Cid Pollendina: Oh, shut up and help me remodel the Besaid Temple page!
Please expand this article into a full one. The following tasks need to be completed:

After gaining airship, from Chamber of the Fayth:

This temple is where the aeon, Valefor, resides as the temple's fayth, a young girl. It is here Yuna completes her studies and becomes a summoner.

Wakka takes Tidus to Besaid Village and introduces him to the temple where a summoner is praying for the fayth. Tidus gets concerned when he hears the summoner hasn't been back for a long time. Though only the summoners and their guardians are allowed inside the heart of the temple, Tidus does not care and ventures deeper anyway to check on them. He comes across Lulu and Kimahri who are not happy to see him there. The door to the Chamber of the Fayth opens and Yuna stumbles out, having obtained her first aeon, Valefor, and thus become a full-fledged summoner.

Yuna enters the temple to find Wakka talking with Tasgio. Tasgio talks to Yuna, explaining that he has come to the temple to talk about his grandson who has joined the Youth League, but he and his wife are with New Yevon, and he is worried about him. He mentions that his grandchildren are moving too quickly. Yuna mentions that new groups have emerged in the past two years where everyone wants to rebuild Spira. She tells Tasgio to speak to his grandson since she's sure that he wants the same for Spira as they all do.

Fiends pour out of the Chamber of the Fayth in the temple, and although Beclem wants to burn it to the ground to stop the infestation, Wakka objects and ventures into the temple alone to stop the fiends. He is saved by the Gullwings who defeat the possessed Valefor in the Chamber of the Fayth, and stop the fiend outbreak. Wakka decides to take better care of himself as he is about to become a father. Beclem agrees to leave the temple alone, and later departs the island, having somewhat changed his mind about Wakka.

The temple may be more ancient than previously implied, predating Yevon. A thousand years ago during the Machina War Besaid was a place where summoners trained and housed a temple with statues depicting deities that used to be worshiped before Yevon's rise. Those days summoners followed different traditions and made their own fayth with help of someone they shared a deep bond with. Summoners used to discard their old name in exchange for a name of a deity and would hold it until it would pass on to someone else upon their death.

Yuna and Tidus end up shipwrecked on an unknown island and Tidus theorizes it to be the Besaid of a thousand years ago. After Tidus is killed in a freak accident and beckoned back to the world by Yuna's feelings for him, the two find themselves in a temple that resembles the Besaid Temple, but has no fayth and the Cloister of Trials is different. In the temple's main hall they come across the statues of the gods people worshiped before the time of Yevon: Kush, goddess of food and shelter; Velm, god of safety; Slone, god of quenching regret; Arb, god of knowledge; Luchel; god of War, Kanaela; goddess of protection from darkness; Meiyou, goddess of light; and Guarudo, god of rest.

The pair eventually escapes the island and it is revealed the entire island was but a summoning.

Aim: To descend towards the Chamber of the Fayth in order to find Yuna.

During Chapter 3. This is a compulsory mission required to complete the game.

Fiends have appeared deep within the temple where Yuna first trained. Get rid of them before Beclem sets fire to the entire place!

In Final Fantasy X-2, the theme played in the temple is simply called "The Temples". The dungeon theme "Labyrinth" plays in the Cloister of Trials. 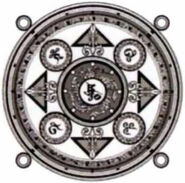 The entrance to Cloister of Trials.

Entrance to the Chamber of the Fayth.

Yuna coming out of the Chamber of the Fayth.

Yuna encounters Valefor inside the temple.