Bervenia Palace (王宮ベルベニア, Ōkyū berubenia?) is a location from Final Fantasy Tactics Advance. It is the palace of the royal family, and Marche Radiuju gains entry here after using the Gift Day ritual to his advantage. He is identified and soldiers mobilize against him, but they are defeated. Babus Swain defects to his side, and the two confront Mewt Randell and Queen Remedi. Remedi takes Mewt and teleports to the Ambervale, summoning Llednar Twem to attack Marche. Llednar keeps Marche on the run for a while, but is forced to retreat when Judgemaster Cid arrives.

This event takes place on a flat battleground with the center raised slightly and pillars surrounding it. There are no other laws in effect during the battle, which allows, pretty much, law-free fighting. Players are allowed five units against a Paladin, Dragoon, Defender, Illusionist, and Sage.

A Sequence is rewarded for a victory, a special item that grows in Weapon Attack power as more wins are accumulated.

This event takes place on the same battleground as the above. Because it is a Mage Tourney, the NoClrMgc law is in effect. This law prohibits any attack that is not White, Black, Red, or Blue Magic. Players are allowed four units against a moogle Black Mage, a Blue Mage, a nu mou White Mage, and a Red Mage.

A Sapere Aude is rewarded for a victory, a special item that grows in Magic Power as more wins are accumulated.

This event takes place on a very watery battlefield. In the left and right corners, there is a 3×5 island where both teams start out at. In the center is a 3×3 island with two corners in water. There are five spaces that are raised above the water as well. Finally, close to the left side starting point, there is a 2×2 island with a palm tree and is also where the Judge resides. The object here is the same as all battles, but is harder because players cannot take an action while in the water.

In addition to the NoLawCrd law, the Target All law is in effect as well. Feather Boots are recommended to allow waterwalking, while Galmia Shoes are not recommended because they disallow water-traversing. Players are allowed four units against a Archer, Dragoon, White Mage, and a Gladiator.

An Acacia Hat is rewarded for a victory, a special item that grows in Magic Resistance as more wins are accumulated.

Unlike the first three, the Clan League is unlocked after "#022 To Ambervale". Before actually unlocking the tournament though, players must complete four side-missions against four different groups of clans and then engage against the "Brown Rabbits". Players are allowed four units against an Assassin, Summoner, Elementalist, and Sniper.

A Peytral is rewarded for a victory, in addition to the rewards for completing the required missions for unlocking Clan League. The Peytral is a special item that grows in Weapon Defense as more wins are accumulated.

Strangely, "#087 Free Bervenia!" takes place in Cyril after completing the storyline and freeing the other 29 areas. It is an engagement against Gukko (or Gutskor, as he is named in battle), who has been reincarnated as a Vampire. Accompanying him is are two Firewyrms and two Ahrimans, who have been given unique species names preventing capture.

Completing the mission liberates the last turf in Ivalice. Bervenia will not come under attack after liberation. Be warned that because of the above, losing this mission is not an option.

Patrols the Bervenia palace to protect the queen. Hard-headed and taciturn. 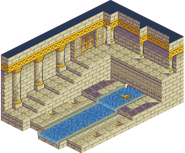