The Berserker (バーサーカー, Bāsākā?) is a recurring job in the Final Fantasy series. In all of its appearances, they wear animal furs, and tend to be more revealing on the female characters. Berserkers take their name from the Berserk status, which they very often actively or passively fall into. However, their statistics, particularly their physical ones, are usually much higher than those of other jobs.

When the Water Crystal shatters, one of its shards grants the Berserker job to the party. The player has no control over the character when the class is used, but have very high Attack power which couples with the ability to equip axes. If a Berserker is equipped with the Chicken Knife, the disastrous Berserker Chicken Knife Glitch can take place.

Umaro is the only character in the series who is a true Berserker, being uncontrollable in battle and changing his actions only if certain Relics are equipped. Gau may also be considered to be a Berserker, but concentrates on enemy abilities rather than purely using physical attacks.

The Berserker dressphere is obtained during Chapter 3 at Lake Macalania. While not naturally in Berserk status, the spell is usable by the class, as well as various status-inflicting and buffing abilities.

Berserker is a job available to the seeq. It focuses on dealing massive damage and smashing the opponent's armor, allowing for even more damage to be dealt. Despite the job's name its only Berserk-inducing ability is Critical: Berserk.

The Berserker appears as a job card in the Labyrinth mode. As long as it is in the hand, it increases the lead party member's EX Gauge by a small amount after each battle. The effect stacks with multiple Berserker cards.

The Berserker is also an advanced job that can be selected for a character in the player's party for Quick Battle, Friend Cards, or wireless matches. It is unlocked by combining the powers of the Monk and the Dark Knight, and doubles the character's initial Bravery.

The Berserker appears as a character card.

Oddly, this maniacal axe-wielding force of nature enjoys cosplaying as a wolf.

The Berserker is a character available to the party, he uses the Rage ability during battle. He unlocks at level 45.

A brutal warrior who relies on his instincts in battle, the berserker wields mighty weapons to lay waste to his enemies. An excellent front line addition to any party.

Berserker is a playable character who can be recruited as the First Time Reward for completing "Airship, Part 3" on Classic difficulty in FF X track of the Core Dungeons.

The Berserker appeared as part of the Crystal Defenders collaboration. 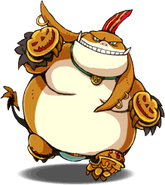 The Berserker appeared on an gold card.

Bartz from Final Fantasy V as a Berserker.

Faris from Final Fantasy V as a Berserker. 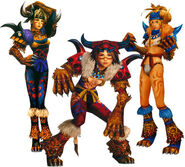 Rikku, Paine, and Yuna from Final Fantasy X-2 in the Berserker dressphere.

Seeq Berserker in Final Fantasy Tactics A2: Grimoire of the Rift.