The Berserker is a dressphere in Final Fantasy X-2 and Final Fantasy X-2: Last Mission. It is obtained at Lake Macalania in Chapter 3 after completing the mission to defeat fiends outside the travel agency.

Each character uses a different fighting style: Yuna pounces and attacks like a mountain lion, Rikku uses capoeira, and Paine uses Panther Kung Fu. Paine's attack animation is the fastest of the three, while Rikku's is the slowest.

The Berserker dons animal skins and fur, as well as durable fabrics.

Yuna wears a tight magenta one-piece outfit with cutouts on her hips, back and stomach. Her outfit has blue lined patterns and she wears a yellow ribbon belt around her waist. She has dark magenta shoulder-pads and headpiece, both with blue-purple horns adorning them. She wears leopard-print gloves and shoes with white fur lining. She wears a blue, beaded necklace and has brown markings on her back, hips, stomach, chest, and face.

Paine wears a tight, indigo one-piece outfit with red-lined pattern. She wears a blue ribbon belt around her waist. She has black and gold shoulder-pads with black horns on each. She wear a black headpiece with silver/red horns on each side. She wears leopard-print gloves and boots with white fur lining. She wears a silver pendant necklace and has red markings on her face.

Yuna's victory pose is to somersault and then stand upright, displaying her claws. Rikku performs a vertical spin, followed by a spinning handstand, before getting back on her feet and pumping her arms. Paine performs a series of kicks and swipes.

Berserker learns counterattacks and other auto-abilities that enhance her in battle as an autonomous fighter who cannot be controlled by the player while berserked. A Berserker who has learned Evade & Counter is especially useful in Via Infinito, which will always dodge enemies with strong physical attacks such as Elder Drake and Concherer and will immediately counter.

Multiple copies of the Berserker dressphere can be found on the ground inside the tower or bought in shops. It increases Evasion by 1 point and Attack by 2 points per each level. It has a high HP growth. However, it is best used for experienced and advanced players due to its low defense stats. 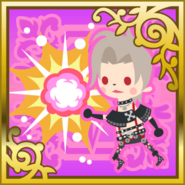 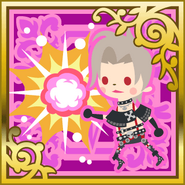 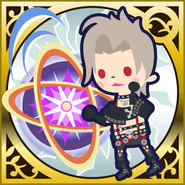 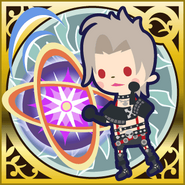 Yuna as a Berserker.

Rikku as a Berserker.

Paine as a Berserker. 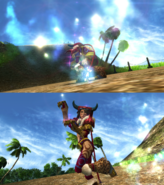 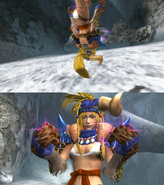 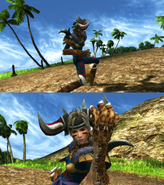