The Berserker is a job in Final Fantasy V obtained after the Water Crystal shatters. The Berserker possesses high Stamina and Strength, making it a powerful job early in the game, and is one of the few jobs capable of equipping axes and hammers. Berserkers are in a constant Auto-Berserk state, meaning the player will have no control over what they do, and as such, support abilities outside of those that give stat bonuses are useless to give to a Berserker.

Mastering Berserker in all four characters in the mobile and Steam versions earns the player the achievement "Skull Buster".

Berserkers wear animal pelts: wolves for the males and tigers for the females. Bartz, Galuf, and Faris have similar clothes, Lenna's is more revealing, and Krile's covers her up similar to a Japanese "disguise pajama".

The Berserker has no actual job command, because of its innate support ability Berserk. The Berserker will attack every turn without a prompt. As such, it is not practical in vital boss battles; instead, it is more of a novelty to be used in random battles (though some use exists early game if given a Barehand or Doublehand, producing high damage for that point). Berserk prevents Confuse and will increase physical damage by 50%.

Berserkers do have MP, which they can put to use by equipping a Rune Axe or Rune Edge (or even both, if they have the Ninja Dual-Wield ability). These weapons drain the wielder's MP to increase their Attack power.

Equipping an ability that boosts the Magic stat, such as !Summon or !Black, might be a good idea if the Berserker is using either the Gaia Hammer or the Rune Axe. The Magic stat is used in the damage calculation for the random quake attack of the former, and the attack bonus for any attack of the latter that uses MP.

A Thief's Agility is a useful ability for a Berserker. Two-Handed is another excellent choice. The job is vulnerable to the Chicken Knife glitch where, if all party members are in the Berserker job, they are unable to run away from battles, and crashes the game if a Berserker is equipped with the Chicken Knife.

Since this job is constantly berserked, three sprites can never be seen, and they go unused. They are the Defend or ready stance (after confirming an action and target), and the two-frame animation sprites for casting magic spells. Berserked characters ignore the ready stance completely, and players cannot select and use magic during battle while using the Berserker job.

Equip Axes gives characters the Berserker's base Strength unless otherwise at a higher value.

Upon mastery, Freelancers and Mimes gain the Berserker's base Strength and Stamina unless they already have a higher base from another mastered job.

The Berserker is the only job without a job command, as the player cannot manually choose its commands. Its support abilities can be used on other jobs by leveling the job up.

The final boss of the Heroes Gauntlet dungeon shares a striking resemblance to the berserker job and shares the same name. The only notable difference is that the boss wields a greatsword instead of an axe.

Berserker appears as a character card. 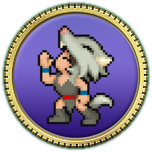