Too late, and to their sorrow do those who misplace their trust in gods learn their fate.

Judge Bergan is a character in Final Fantasy XII. An antagonist, he is a Judge Magister, the highest rank possible in the Archadian military. A cruel man, he strongly believes in military might, and that only the strong should rule, with an iron fist.

As a Judge Magister, Bergan wears the typical silver and black plate mail of the group, a frog-mouth helm, and a black cape with the sigil of the Archadian Empire on it in red. Compared to the other Judge Magisters, Bergan's armor has more white details, and an emphasized collar and neck. His helmet and collar both featured spike-like protrusions. Under his helmet, Bergan has blond hair with sideburns.

Ruthless, you say? Would he were more so! He gives traitors no quarter, be they of his own blood! How fitting for one who would bear the burden of Empire!

Bergan's defining traits are his cruelty and brutality, and he prides power above all else. Bergan champions Vayne as an aspirant to the throne for his power and ruthlessness, and declares him a "true" Dynast King for using manufacted nethicite to seize his power, while sneering that the actual Dynast King Raithwall "[begged] nethicite scraps from his master's table." Bergan holds no sympathy for Judge Drace when she is judged a traitor, and in the ultimate expression of his cruelty, he slaughters the peaceful refugees of Mt Bur-Omisace and mocks their religious beliefs when the party confronts him.

For all his vileness, Bergan seemed to have some respect for Judge Zecht, growing angry when he feels Drace has insulted the vanished Judge Magister and replying that Zecht was a noble warrior.

In the manga adaptation, Judge Bergan is involved in the Battle of Nalbina Fortress. He fights Lord Rasler and his ground troops, but it is a ruse to keep Dalmasca's reinforcements away from the Fortress in time to destroy its paling.

Judge Bergan is first seen when he, Judge Drace, and Judge Zargabaath, are discussing Vayne's leadership. He again appears when Emperor Gramis is found murdered. A staunch supporter of Vayne Solidor, Bergan is more than willing to accept him as Archadia's new Emperor, since Vayne also believes in ruling with absolute power. When Drace accuses Vayne of killing his own father, Bergan gleefully knocks her aside by using the power of his manufacted nethicite.

Bergan is sent with Zargabaath and Gabranth to Mt Bur-Omisace to retrieve Larsa. While Zargabaath and Gabranth escort the young lord back to Archadia, Bergan has other ideas. Going on a rampage, Bergan slaughters the people of Mt Bur-Omisace, including the Gran Kiltias Anastasis. Ashe's party arrives too late to save the Gran Kiltias, but they corner Bergan.

As he lectures on the brilliance of manufacted nethicite, Vaan sees Venat controlling the Judge. The party tries to talk the Judge out of doing anything else, but with the power of nethicite coursing through his body, Bergan attacks the party in a rage. After he is defeated, the power of the nethicite overwhelms him, killing him where he stands.

Judge Bergan is fought in Mt Bur-Omisace after the party witnesses the death of Gran Kiltias, and he is aided by three Imperial Judges. 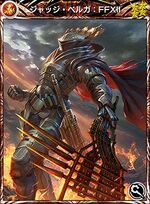 Bergan is voiced in the English release of Final Fantasy XII by Gary Martin, who is perhaps best known as the voice of Zordrak in the British children's cartoon, The Dreamstone.

Yōsuke Akimoto voices him in the Japanese version. He shares his voice actor with the narrator for Final Fantasy Type-0 and Xaldin/Dilan in the Kingdom Hearts series. 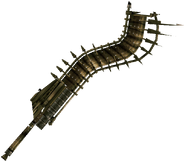 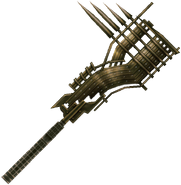