God Stone bearer, with me now do treat. Your spirit and my flesh as one shall merge. Life undying yours forever more.

), who also refers to himself as the Devil, is the second Lucavi demon that Ramza Beoulve must fight in Final Fantasy Tactics. He is associated with the Aries auracite, yet is a Virgo as a gameplay unit.

Belias has a ram-like face covered in off-white wool, large brown horns and eyes in black irises. He has four arms, wears blue plated armor and blue boots, and an olive green sleeveless robe with orange and white linings at the edge.

Like all Lucavi, Belias is evil, power-hungry, and contemptuous. He seeks to exploit humans and tempt vulnerable yet powerful individuals with demonic powers.

Wiegraf Folles is unaware of the powers within the Aries Stone, given to him by one of the Knights Templar. After the events at the Orbonne Monastery, Wiegraf is defeated by Ramza and drags himself out of the church to die. The stone rises from his cloak and offers Folles deliverance from death should he give himself over to the Lucavi. Wiegraf agrees and Belias possesses him, revealing unto Wiegraf the powers of the Lucavi. Before Ramza can engage him, Belias teleports away.

Belias appears at Riovanes Castle and Ramza must fight Wiegraf in the castle dungeons, first one-on-one, after which Wiegraf teleports to the back of the room and transforms into Belias with the Aries Stone. Ramza's allies arrive, but Belias brings in three Archaeodaemons to even out the numbers. After Belias is killed, he leaves the Aries Stone behind.

Belias's job is Gigas (Warlock in the PS version). Even though Belias is associated with the Aries Stone, his zodiac sign during battle is Virgo, like Wiegraf.

Belias has roughly 1045 HP and 255 MP, has 70 Bravery and Faith, and is level 31. He is vulnerable to Blind, Slow, Silence and Immobilize. Belias can use several powerful moves, mostly summons, including Cyclops, and his Seal can petrify an opponent. The Archaeodaemons that support him make things worse with the powerful move Unholy Darkness.

Belias's battle is notorious for the difficulty it has posed to new players, as if the player made their save just before the battle there is no way back out to the overworld to buy more equipment or grind. If this was the player's only save, many found themselves stuck before an unwinnable battle.

It is possible to make the fight with Wiegraf before the encounter with Belias easier by exploiting a glitch in the game's AI, thereby saving on health and time. The player can equip Ramza with a Chameleon Robe before entering the fight to make Ramza absorb Holy damage. Wiegraf uses what the AI registers as Holy-based attacks during regular gameplay, but since the Chameleon Robe absorbs it, the AI will refrain from using those kinds of attacks, leaving Wiegraf to use much weaker Martial Arts moves instead of the Holy Knight abilities.

One approach to facing Wiegraf/Belias is to make Ramza a Dragoon, as at this point the Jump command can inflict severe damage. Equipping Ramza's Squire action ability to use Tailwind is also recommended. It is good to keep using it until Ramza's speed allows him to move twice per one move for Wiegraf.

Another strategy is to make Ramza a Monk (using the Dual Wield support ability) or a Ninja (using the Concentration support ability), and give him all the attack-boosting equipment available (the Bracer accessory, recently available for purchase just before the battle, and the Power Sleeve armor). With luck, it's possible to defeat Wiegraf in a single turn, before he has a chance to attack. If this is not possible, one could also use the debilitating skills of a Knight with Dual Wield along with the Concentration support ability on a Ninja causing a severe drop in Belias's power, leaving only the Archaeodaemons as a threat.

The only weakness of this strategy is that Belias has massive power in both physical and magickal stats, and while his spells are arguably much more dangerous, his physical prowess is still potent enough to kill lower HP/Defense characters in a single hit. With Dual Wield one cannot equip a shield, thus forsaking Physical Evasion, causing Belias's counter ability to be a sure hit, if not making the Ninja a sacrificial pawn (unless one uses cloaks).

The best way to avoid getting stuck in story battles is to level the party roster equally; if Ramza is a much higher level than the generic characters, his level bumps the enemies' level.

When fought in the thirteenth Rendezvous battle: Nightmares, Belias is level 99 and carries the same abilities and status immunities as previously.

This twisted monster was born of auracite's power. Its attacks wound its enemies in both body and soul.

The formula for the hit rate of Lich is as follows: 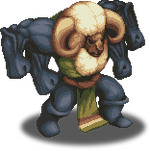