Belias is a boss in Final Fantasy XII whom the party fights in the Tomb of Raithwall to reach the Dawn Shard. He is the first Esper the party obtains, and is the only one that must be summoned during the storyline. In the Zodiac versions, he is also fought in the Trial Mode at Stage 10, where the player can steal the Sword of Kings (common) or Goddess's Magicite (rare) from him.

In The Zodiac Age, the license to gain a second License Board for the job system is granted upon defeating Belias.

Scion of darkness and guardian of the Holy Realm, made by the gods in opposition to Loghrif the Transcendent, scion of light. Called the Gigas for his appearance: man and monster fused as one. Considered a mistake upon his making, and receiving not his intended role, the Gigas challenged the gods and lost. Scorned by his masters, he found another: the Dynast-King, whose tomb he swore to protect for eternity.

The Original Japanese Guidebook cites Belias's MP as being 1215, but subsequent guides list it as 999.

Tomb of Raithwall (Cloister of Flame)

Tomb of Raithwall (Cloister of Flame)

Belias guards the Dawn Shard at the heart of the Tomb of Raithwall. He is a heavy hitter but slow. His unique attack, Firaja, deals heavy Fire damage to everyone in the party, and also has the potential to inflict the Oil status. Although Belias has a high Magick Resist, his elemental weakness to Water leaves him open to water spells.

The Rain of Tears unlockable item (Aqua Shot and Vega) in the Bazaar is useful for this battle. A good method is to have all characters equip magick-enhancing equipment and set them to cast Aqua, or use Aquara Motes. Shell is useful, as is a healthy supply of Handkerchiefs or equipping Gillie Boots. 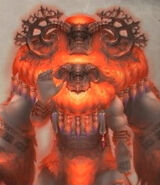