Defeated as a boss, then license purchased on the License Board (costs 10 LP)

Scion of darkness and guardian of the Holy Realm, made by the gods in opposition to the Transcendent Loghrif, scion of light. Called the Gigas for his appearance: man and monster fused as one. Considered a mistake upon his making, and receiving not his intended role, the Gigas challenged the gods and lost. Scorned by his masters, he found another: the Dynast-King, whose tomb he swore to protect for eternity.

Belias, the Gigas is a level one Esper in Final Fantasy XII. He is found in the Tomb of Raithwall guarding King Raithwall's tomb, and the first Esper obtained. Belias resists damage from Axes and Hammers. His license costs 10 LP, and he requires one Mist Charge to summon.

Belias can be unlocked in the Sky Pirate's Den in the Clan Primer. By acquiring every Esper, including Zodiark, the player gets the award of "High Summoner".

Belias is also Ashe's summon in the playable demo. Though the player may assign him to any party member, in the Final Fantasy XII manga Belias's glyph is emblazoned on the back of Ashe's hand to mark his servitude to her.

Belias appears as a four-armed giant with ram-like horns. He is associated the sign Aries, the Ram, which is visible by his horns. From his power of Fire, Belias's color sign is red. He is referred to as the Mesha Ascendant, which is the Sanskrit name of its zodiac sign as used in Jyotish (Hindu) astrology.

Belias is based on a Lucavi from Final Fantasy Tactics. He returns in Final Fantasy XII: Revenant Wings as a Rank III Magical (Ranged) Fire summon.

Belias is fought in the Tomb of Raithwall as he guards King Raithwall. He must be summoned to open the gate to the Giruvegan, and is the only summon who is required in the main story.

The Esper's glyph marks itself on the summoner's body as a sign of its servitude to him/her. Ashe's group enters the Tomb of Raithwall and to Belias's chamber and Basch, Vossler, Fran and Balthier battle Belias while Ashe, Vaan and Penelo try to enter the door the Esper was guarding to get the Dawn Shard.

Vaan wishes to assist in fighting Belias, but Ashe tells him their mission to retrieve the Dawn Shard takes priority. Vaan is displeased with Ashe's attitude towards power and her friends, and leaves her to retrieve the nethicite herself. Ashe returns to protect Vaan before Belias can strike him down, and the group defeats it, Belias's glyph marking the back of Ashe's hand.

The group is captured by Judge Magister Ghis and brought to the Dreadnought Leviathan where Ashe enters a trance-like state and summons Belias against Ghis. As the Dawn Shard's reaction causes a chain of system failures and explosions through the airship, Ashe awakens from her trance and sees her arm where Belias's glyph appeared has grown bulbous and deformed. She dismisses Belias, causing her arm to be cut to a stump below the elbow.

After being fought as a boss, Belias's license can be purchased for 10 LP. In the Zodiac versions, Belias license now costs 20 LP.

Esper licenses sometimes unlock licenses that could not otherwise be reached. Belias's license will appear on all boards, but once chosen by a character, will disappear from all other boards. In The Zodiac Age version, the player can choose two licence boards for each playable character, and activated licenses are activated on both boards if present.

Belias allows access to the following licenses on these boards: 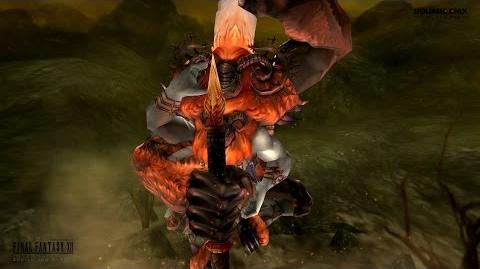 Belias can be summoned for one Mist Charge.

A Fire-elemental attack. It is like the standard higher level Fire spell, and its power is boosted in the Zodiac versions.

A Fire-elemental attack, and Belias's ultimate attack. Twirling his staff, Belias summons a giant fireball. He then sets his staff ablaze, jumps high into the air and thrusts his staff into the earth, making the ground break apart. Fire and molten rock from the depths of hell spew out, burning everything in their path and damaging the enemy.

Belias absorbs Fire, is weak against Water, and takes half damage from every other element.

In the Zodiac versions only:

Belias is a boss fought in Tomb of Raithwall. In the Zodiac versions, he is also fought in the Trial Mode at Stage 10, where he yields Sword of Kings and the Goddess's Magicite as steals. His unique attack, Firaja, deals heavy Fire damage to everyone in the party, and also has the potential to inflict the Oil status. Belias has a high Magick Resist, but has an elemental weakness to Water.

Belias's Glyph in his crystal.

Belias's Glyph as seen after his crystal has shattered. 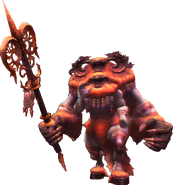 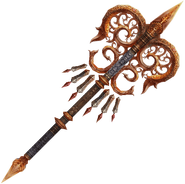 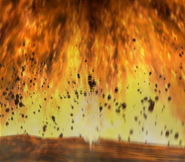 Belias in the manga.