Belhelmel is an enemy in Final Fantasy VIII, commonly found on the Galbadian continent. It has a rotating blade around its face and its battle tactics change when its face changes.

Has a rotating blade around its face. Its battle tactics change when its face changes.

As a flying enemy, Earth-elemental attacks will not work on it.

Belhelmel can enter two modes—Laughing mode initiated with the message "Belhelmel laughed!", and Furious mode initiated with the message "Belhelmel is furious!". In Laughing mode, Belhelmel will swing lightly with a merry face. It will use magic attacks instead of physical and counters all magic attacks with Laser Eye. In Furious mode, Belhelmel will swing and display an angry face. It will use physical attacks more often and counters all physical attacks with Slice.

This monster is frequently partnered with either Geezards or Blood Souls. When level 30+, it may rarely drop a Laser Cannon, notable for refining into Pulse Ammo, a component needed to model Squall's ultimate weapon, Lion Heart.

While laughing, Belhelmel can be rendered unable to attack by inflicting it either with silence or berserk, preventing it from using any magical attack.

Belhelmel is a Level 2 Monster Card in Triple Triad used to play the minigame and for turning into Saw Blade with Quezacotl's Card Mod. 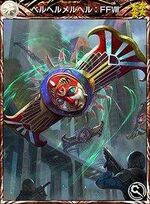 Counter Slice.
Add a photo to this gallery
Retrieved from "https://finalfantasy.fandom.com/wiki/Belhelmel?oldid=3350766"
Community content is available under CC-BY-SA unless otherwise noted.