Let us see which are stronger. My aeons or yours. A one-on-one match. Not to the death, of course. What do you say?

Belgemine has fair skin, dark eyes, and brunette hair drawn into yellow cauls—the ornaments on the sides of her head. She dresses mainly in greens and whites, and has a round black mark resembling a bindi or tilak on her forehead. She wears a wrap robe, sectioned with bands. Her sleeves are cuffed by bands above the elbow, puffing the shoulders out, and the bell parts of the cuffs have a latticed diamond pattern. The inside of the lattice gradiates from sea green to darker green. She wears fingerless gloves held by a gold ring on the middle finger. Under this robe, Belgemine wears an olive dress with a low V-neck, which displays the same latticework pattern starting above the knees, ending above the ankle, and another skirt of feathery material. Her belt resembles an obi edged in pale bluish gray, and is diamond-patterned tied with a thin orange sash ending in a large white, green and orange bead and a red tassel.

Belgemine is mature and self-possessed and comes off as serious and mysterious, but has a playful note to her personality. At times she seems regretful and sad, most likely stemming from her failure to defeat Sin, and her only wish is to assist someone strong enough to put an end to the monster. Belgemine's role is not only to train summoners' aeons in battle, but also to expound on "what is truly important for a summoner". For example, Belgemine reminds Yuna that only summoners can hope to defeat Sin (after machina fail to do so in Operation Mi'ihen), and that they are not tools of Yevon.

Belgemine died sometime ago during her pilgrimage and returned as an unsent in Spira to help other summoners grow stronger in their quests to defeat Sin. She avoids holding the feelings of resentment and hatred usually fostered by unsent and thus maintains her rational, human feelings, rather than become a fiend. She makes the abandoned Remiem Temple her home.

Two hundred years ago, Belgemine sent fiends and humans on an ark to escape Sin and make a new life for themselves. It is unknown if she was already an unsent at this time.[1]

Yuna's party meets Belgemine on the Mi'ihen Highroad where she invites Yuna to compete in a contest of aeons. When Yuna believes Belgemine could defeat Sin before her, she states she "was not able to". She reappears on the South Bank Road of the Moonflow, and then in the central part of the Calm Lands. Should Yuna win the challenge, Belgemine will grant her several pieces of equipment and spheres, although Yuna will still receive inferior items if she loses.

Should Tidus rent and ride a chocobo, the party can travel to Remiem Temple via the chocobo feather in the Calm Lands where Belgemine reveals she is unsent. She asks Yuna not to send her yet, as she sees Yuna to be a potential high summoner, and trains her in the hope she will defeat Sin.

If Yuna challenges all of Belgemine's aeons, she will be given the option to send Belgemine. As she is sent, Belgemine is joyed to see Yuna's summoning skills surpassing hers, and encourages her to destroy Sin and save Spira.

Belgemine makes several appearances to challenge Yuna's aeons in battle, and becomes instrumental in their development. In her first three appearances the player can accept a challenge to battle one aeon: Ifrit is battled on the Mi'ihen Highroad, followed by Ixion on the Moonflow, and Shiva in the Calm Lands.

Belgemine will fully heal Yuna before each battle, and gives a reward depending on whether Yuna wins or loses. The player will obtain the Summoner's Soul and Aeon's Soul key items from the battles against Ixion and Shiva, regardless of the outcome, that allow the player to teach aeons new abilities and augment their stats. If the player's aeons are weak, it is viable to pass Belgemine the first time she is met, and backtrack after reaching the next save sphere; this is easier than progressing from the start of the route to challenge her.

When the party arrives at Remiem Temple, Belgemine's aeons can be battled, one at a time, to earn several rewards. Belgemine still heals Yuna before each battle. Should the player obtain Anima, Yojimbo, and the Magus Sisters as aeons, then Belgemine, too, will allow these aeons to be challenged. After all aeons have been defeated at least once the player can send Belgemine to earn the Moon Sigil for Yuna's Nirvana.

At Remiem Temple, the player can fight each aeon as many times as they want, but after the first time the aeon is defeated, the prizes will change as follows:

The Moon Sigil is obtained by defeating all of Belgemine's aeons; including Anima, Yojimbo and the Magus Sisters, and then sending Belgemine. 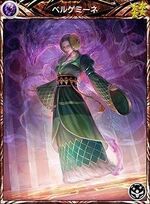 Yuna and Belgemine are the only summoners to have all playable aeons. It is unknown how Belgemine obtained Anima since her fayth was created only two decades prior to Final Fantasy X, and the only person known to have her is Seymour Guado.

In the HD Remaster, when Belgemine's Anima uses Oblivion, the version of Dark Anima appears instead of her normal version.

Belgemine is voiced by Kayoko Fujii in the Japanese version.