Final Fantasy Wiki
Register
Don't have an account?
Sign In
Advertisement
in: Characters in Final Fantasy Crystal Chronicles: My Life as a Darklord, Selkie 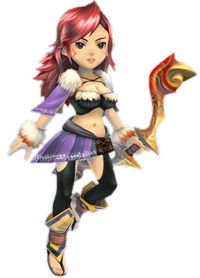 Bel Dat (ベル・ダット, Beru Datto?) is a Selkie girl from Final Fantasy Crystal Chronicles: My Life as a Darklord. She is the younger sister of Bal Dat and leader of the Stripped Brigands.

Bel Dat has long crimson red hair, red eyes and light red markings on each cheek. She wears a striped black cropped top with fur accents and a purple sleeved shrug with fur shoulders and fur bracelets around each wrist. She wears a striped purple asymmetrical skirt with a dark purple belt and brown buckle. She has black garter leggings and black sandals with gold and blue cloth wrapped around each ankle held on with a brown strap.

In search for a hero to defeat, Mira arrives at Bel Dat's hideout hoping that by defeating the infamous Striped Brigands, she will obtain the reputation of a dreaded Darklord and many striped apples for pie. After victory Mira finds that Bel Dat is the leader of another gang: the Stripped Brigands.

When confronted by Mira to surrender her treasure, Bel Dat assures she does not have any. Apparently, she was confused for her brother and his gang. Bel Dat, irritated by this, expresses that although she does not possess much treasure, she has gained some information of a certain Darklord. In revenge, she spreads Mira's secret all over the world.

Bel Dat is fought as the boss in the second chapter at her hideout in Voleebo Flatland.