Behemoth Knife (ベヒーモスナイフ, Behīmosu Naifu?) is a recurring weapon in the series. It is generally a powerful knife or dagger.

Behemoth Knife is a high-ranked dagger found exclusively in the 3D remakes in the Temple of Time, and provides 78 Attack and +8 Strength. It can be equipped by the Onion Knight, Thief, and Ninja.

Behemoth Knife is a dagger that provides 31 damage, 211 delay, HP +25, and Attack +8. It deals 8.82 damage per second and accumulates 57 TP per hit. It can be equipped by level 70 Warrior, Thief, Paladin, Dark Knight, Bard, Ranger, Samurai, Ninja, Dragoon, Corsair, Puppetmaster, and Dancer. It can only be obtained through synthesis.

The Behemoth Knives are a pair of

Ninjas. They can be obtained in Revenant's Toll by trading 5 Behemoth Horns acquired from killing the Behemoth in the "He Taketh It with His Eyes" FATE. 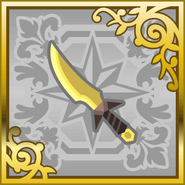 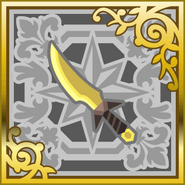