The Behemoth King is a powerful enemy in Final Fantasy XIII. It is first found in the Archylte Steppe.
See also: King Behemoth

Behemoth King starts in a quadrupedal state and attacks by swiping with its big claws. Hurl inflicts a large amount of physical damage against one target and launches them in the air.

When near death, Behemoth King transforms into a more powerful form as soon as it gets a chance (it cannot transform when launched or if interrupted). It will recover all of its HP and remove any status ailments, and gain higher max HP. It now stands on two legs and uses more powerful attacks, including Thundara and Thundaga. as well as Sunder instead of Hurl.

The player can wait for the Behemoth to turn its back and attack it to get a preemptive strike. Relentless Assault and Tri-disaster paradigms can be used to Stagger it quickly. If the Behemoth is kept airborne with launch, it cannot transform until it lands.

There is a Behemoth King to the right as the party enter Archylte Steppe on the south end, just after the Base Camp (the Archylte Steppe Northernlands is also an easier location for battling multiple Behemoth Kings). After killing this Behemoth, the party can run just past the save point. The player can hop back up to where the Behemoth was, and it should have respawned. One can earn about 2,000 to 4,000 CP a minute this way.

A good place for end game grinding is in the Archylte Steppe Northernlands near the entrance to the Mah'habara Subterra caves. The battle is a three-way between a Behemoth King and a Megistotherian, and is always a preemptive strike. The player should first take out the Behemoth King before it transforms.

With a good party, the battle takes around 10 seconds with a reward of 6,600 CP, or 13,200 CP with the Growth Egg. After the battle, running up the hill a few steps past the save station respawns the pair. 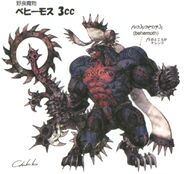 Behemoth King about to be launched.
Add a photo to this gallery

Retrieved from "https://finalfantasy.fandom.com/wiki/Behemoth_King_(Final_Fantasy_XIII)?oldid=3301496"
Community content is available under CC-BY-SA unless otherwise noted.