Non-player character
Behemoth K, or simply Behemoth, is a non-player character and antagonist in Final Fantasy Brave Exvius. Despite his bestial appearance, he is a member of Hess' Eight Sages. He debuts in the main story's Chapter VIII alongside Sol, and their objective, after centuries of being sealed in crystal, is to destroy Lapis.

It is unknown whether the "K" on its name stands for Kaiser or King.

Like the members of its kin, the Behemoth is a large canine creature standing several feet tall and sporting a prodigious musculature and a long, bulky tail. The Behemoth has a handful of unusual traits such as a distinguishable grey fur, and a pair of black, demonic wings from his back, a characteristic not found on Behemoths in the series. Unlike the regular Behemoths faced on the game, the sage adopts a bipedal posture rather than a quadrupedal one. As to be expected he has a pair of elongated black horns, although his left horn is broken at the tip. Both Dark Fina and the Dark Elf state the Behemoth is comfortably fluffy.

Behemoth K has a major redesign for his Trial encounter. His face is less canine in nature and more wicked with a more menacing set of long teeth and blank eyes glowing blue.. Both of his horns are at full length and longer than before and now point forward instead of upwards with their tips coated in red, hinting at blood. His body has far less fur than before now limited to near his elbows and as a long mane originating from his head, which shows his extraordinary musculature and several blood vessels. His hands are blue and with red nails.

The Behemoth is described as a monster who was able to develop reason, becoming a significantly wise creature in the process. However, as a result of being sealed in a crystal alongside Sol's influence, his rational ability was reduced to the minimum, rendering him nothing but a beast moving through animal instinct. He does, however, seem to have a small fraction of intelligence as he obeys Sol without question. Nonetheless he was able to pursue the party through teleportation, demonstrating high intellect for a monster.

After briefly regaining his senses, it is seen that the Behemoth is indeed a wise creature who was well aware of his actions and had no real intention to spread destruction.

In his past, it was seen that he was ticklish and enjoyed when Dark Fina and Eldareet fluffed his fur, something they did repeatedly.

Behemoth's origins are unclear, only that having developed rational thought, he joined the Eight Sages, thus becoming one of Hess' main lieutenants, under Yuraisha's patronage.

He was however faced and defeated by the Sworn Eight of Paladia and sealed into Crystal as part of their plan to stop the war. When the Sworn Eight were betrayed and transported into Lapis along with the entire landmass of the battlefield, he was sent with them as a result, spending 700 years sealed until the Crystals broke. The sealing would have side effects that would deprive him of his gained rationale and due to Sol's influence, became little more than his obedient servant.

The Behemoth appears following the final confrontation against Veritas of the Dark as Sol destroys the Dark Crystal. As the sage voices his disgust for human life, Sol blasts the party with a Holy spell. Veritas of the Light and Darklord are separated from the party due to the attack and the Behemoth intercepts them. A weakened Darklord is then mauled by the Behemoth, killing him as Citra calls out his name.

The Behemoth is seen alongside Sol several times as the party attempts to catch up to them to prevent them from opening the Gate as Sol uses the crystals around him to summon visions of monsters to delay them. The party catches up a second time with the sages which infuriates Sol, so he has monsters and the Behemoth to deal with the party as Sol escapes. The Behemoth proves to be a resilient opponent forcing Citra and Veritas of the Waters to use a teleportation spell to take the Behemoth with them so that he won't be an obstacle. The party pursues Sol while the two remaning members of the Sworn Six draw the full power of their armors to fight the Behemoth.

The Behemoth is able to overpower both Citra and Folka, seemingly killing both of them. He then utilizes teleportation magic to appear before the party, intending to follow Sol's command to kill them. In an apparent display of his superiority, the Behemoth tosses the helmets of his recent victims. Seeing them infuriates Nichol and Sakura, now fully committed to defeat the Sage. Rain notices the beast has been weakened and the party attacks with all their might. Now on the verge of dying, the Behemoth regains his sanity and requests that they, likewise, free Sol from his madness, passing away on the spot.

Behemoth K, here simply called Behemoth, appears as a boss during the main story on the stages Twilight Crystal Woods - Fangs of Confusion (Land of the Crystals) and Roaring Volcano - The Mad Sages (Wandering Lands). A Level 70 boss in both instances, the Behemoth can be a difficult opponent if not prepared, specially at the time of its release, should the player not be able to defeat him in one turn.

Behemoth K appears as the titular boss of the Behemoth K, the Maddened Sage Trial. Here he is a significantly more formidable adversary, capable of powerful physical attacks, counter every element used against him with an imperil and attack of the same element on the entire party, major non-elemental damage, status ailments and even instant death. This trial was infamous at the time of release due to the nigh impossibility for any unit to survive his physical attacks, prompting most players to employ full physical evasion on their parties. 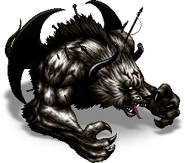