A hulking beast with large, powerful horns. Also a heavy mouth breather. But even heavier than that is its fearsome Heavy Counter, which is enough to make even the spooniest bard sorry he swung his lute.

Behemoth is an enemy in World of Final Fantasy.

Once per battle: Reduce HP; requires a babyhemoth prism. 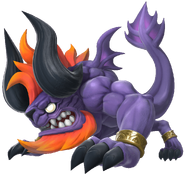 Retrieved from "https://finalfantasy.fandom.com/wiki/Behemoth_(World_of_Final_Fantasy)?oldid=3412627"
Community content is available under CC-BY-SA unless otherwise noted.