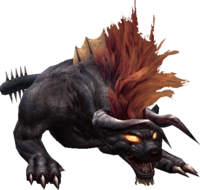 Behemoth (ベヒーモス, Behīmosu?, lit. Behemoth) is an enemy family in Final Fantasy Type-0. It has three variants and two enemies. In lore, Behemoth is the wild variant while Behemash is the military-deployed one.

Possibly the most famous monster in Orience, the behemoth is endowed with a sturdy build and incredible strength. In spite of its size, this gargantuan beast is also extremely agile. The behemoth charges at nearby enemies and swings its tail to strike those who manage to evade its charge, guarding itself from nearly all attacks. The royal army controls behemoths in combat, referring to them as "behemashes."