The Behemoth is the first enemy in Final Fantasy Mystic Quest, fought at the Hill of Destiny. It is the only boss encounter besides the Dark King to not use the standard boss theme; it has the theme for Hill of Destiny.

As it is the first boss before equipment or items can be bought, defeating it is merely a matter of attacking it and hoping that the player's attacks do not miss. It has three phases. After losing some health its horns and fangs are cleaved off, and eventually portions of its back are even sliced off. 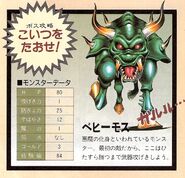 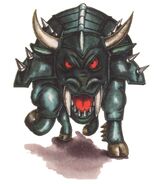 In the German release, the Behemoth is called "Torros", based on the Spanish word toros, meaning "bullfighting".