Final Fantasy Wiki
Register
Don't have an account?
Sign In
Advertisement
in: Characters in Chocobo Racing, Characters in the Chocobo series
English 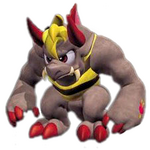 Behemoth (AKA Ben) is a recurring non-player character in the Chocobo series. At times, it appears as an obstacle to Chocobo's adventures, on other occasions an ally.

Behemoth appears as an enemy.

Behemoth appears as different types of enemies in the dungeons. A Behemoth family of stone carvers live in the village. By helping them, Chocobo may be able to get summoning feathers this way.

Behemoth is the mighty magical monster of Vulcan-O Valley, and the guardian to the portal into Fantasia. He keeps the last piece of Magicite. His ability is Charge, which speeds up Behemoth to spin racers out or potentially give them a level 3 crash while they're spinned out. He drives the Behemo-Buggy 99. His theme is a remixed version of the cave theme from Final Fantasy III.

Behemoth lives in the caverns of Mt. Magma, and is ensnared under Irma's control by her Black Crystal to act as an obstacle against Chocobo. While under her control, he spoke with terrible grammar, stringing together sentences like "Me am victory" (of which Shirma points out). Once he is free of her influence though, he proves to be quite eloquent and articulate, speaking in a somewhat English accent.

Behemoth is named Ben in this game.