Detects by Sound
Detects by Smell
List of Bee Enemies
Bee is a genus of enemies in Final Fantasy XI.

Bees are common flying vermin found throughout Vana'diel. Not all bees are docile, as some will attack and swarm adventurers who wander too close. Not surprisingly, they attack with their stingers. In doing so, they will sometimes take their own lives as a last resort. Bees inhabiting the Quon continent are typically black and yellow, while those found on the Mindartia continent and Elshimo Islands are typically black and red.

Hunting bees is a lucrative venture, as they drop many useful things. Their wings can be made into earrings and arrow fletchings, their stingers ground into poisonous powder, their honey is a much loved commodity for chefs, and even parts of their hive can be melted into versatile wax.

Concept art of a bee. 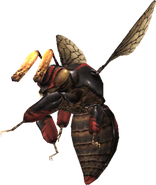 Bees on the Mindartia continent and the Elshimo Islands.
Add a photo to this gallery
Final Fantasy XI enemies
Retrieved from "https://finalfantasy.fandom.com/wiki/Bee_(Final_Fantasy_XI)?oldid=3239575"
Community content is available under CC-BY-SA unless otherwise noted.