Final Fantasy Wiki
Register
Don't have an account?
Sign In
Advertisement
in: Characters in the Chocobo series, Antagonists, Final bosses 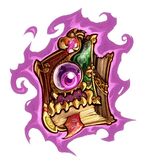 Bebuzzu (ベブズ, Bebuzu?) is the antagonist of Final Fantasy Fables: Chocobo Tales. An evil spirit trapped in a book, he was accidentally released by the Black Mage Croma and Chocobo.

In the modern day, while traveling the world, Croma found the tome and returned it to the Chocobo farm. Showing it to Shirma, she was less than impressed by this tome. However, a nearby chocobo looked at the tome and managed to unlock it. By unlocking it, Bebuzzu was freed, and he proceeded to absorb all the chocobos on the island.

While Chocobo, Shirma, and Croma relight the crystals of the island, Bebuzzu controls another human on the island, Irma. Her sad past made her easy to control, and Bebuzzu gave her the Dark Crystal, to absorb the powers of the crystals. Whenever Chocobo and the gang restored a crystal, Bebuzzu would appear and absorb its power, thanks to Irma.

Every time he was defeated, but upon his fourth defeat he reveals he had planned all of this. When he was freed, he saw the future, and saw that the Chocobo had the power to restore all the crystals. Using this knowledge, he just let Chocobo restore the crystals so he could gain all their powers, and all he needs to do now to become the greatest power ever is to kill the descendant of a Light Warrior. He takes Irma, knowing that she is the final descendant.

At the center of the island, which also happens to be the center of the world, a portal to a dark world opened. Chocobo leaps through the portal and finds Bebuzzu's tome. The tome is called "Legend of the Crystals", and explains the origin of the world. It also explains that there is a fifth crystal, the Dark crystal, and that Bebuzzu is part of this Dark crystal. As such, he wants only what the crystal wants, a world of nothingness. Bebuzzu appears in his true form, a monstrous dog-like creature.

However, even with all his power fully restored, Bebuzzu is no match for the young Chocobo. Together with Irma's partner Volg, the chocobos manage to defeat Bebuzzu before he can sacrifice Irma. Upon his defeat, he is stored in the tome once again.