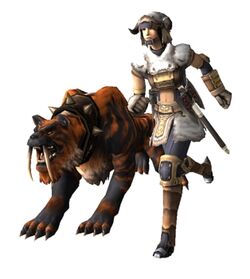 Template:See Also The Beastmaster is an advanced job in Final Fantasy XI. Beastmasters are the equivalent of Mediators from other Final Fantasy titles. The key ability of a Beastmaster is Charm, allowing them to bend the will of certain types of enemy creatures, mostly plantoids, lizards, vermin, and animals.

Since Beastmaster is an advanced job, players must complete a quest before they are able to level as a beastmaster. The beastmaster quest begins in Jeuno and takes the player all of one zone away to Qufim Island to inspect a coral outcropping. In all, this is the easiest of all advanced job quests, requiring, at most, the player to be mindful of the Gigas, skeletons, weapons, and the Kraken that loiters near the actual coral outcropping. Upon returning to Jeuno after looking over the coral, the player will be able to level as a beastmaster. 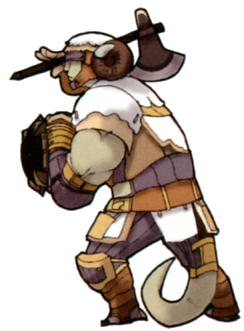 Soloing is a style of play in Final Fantasy where the Beastmaster is alone, without a party to support them. This is what most Beastmasters do to gain experience. It is a slow and often painful process, one not conducive to most player's tastes. The general strategy for most is to try to charm a creature of an "even match" or "decent challenge" type and then fight a creature with the aid of the charmed creature that is either an "even match" or "tough" or possibly even "very tough".

Retrieved from "https://finalfantasy.fandom.com/wiki/Beastmaster_(Final_Fantasy_XI)?oldid=2229789"
Community content is available under CC-BY-SA unless otherwise noted.