Trainers whose open hearts and strong wills allow them to capture and control enemy monsters.

The Beastmaster, also known as Trainer or Mediator, is a job in Final Fantasy V obtained after the Fire Crystal shatters. It is the only job aside from Freelancer that can equip whips allowing the Beastmaster to attack from the back row for full damage, as well as the added benefit of either paralyzing the enemy or casting a spell on them.

Beastmasters focus on catching and releasing enemies from a gourd in battles for various abilities for a one-time use, as well as using the Control command to make monsters in battle fight for them.

Mastering Beastmaster for all four characters in the mobile and Steam versions earns the achievement "Catch and Release".

The Beastmaster dresses in wool and some even take the ram's horns. Bartz, Galuf and Krile have the same costume, although Krile's is more covered. Faris wears earmuffs and has a tail and Lenna has a headdress and a puffy collar. Galuf's costume was also given a tail in the mobile/Steam release.

The Catch command lets the player capture an enemy during battle, provided the target has less than 1/8 of their total HP remaining. The Kornago Gourd changes this to 1/2 HP. If the player wants a particular monster, one can try Gravity or the Blue Magic spell Missile, as both reduce the health of the foe without killing it, allowing the character to catch it more easily. 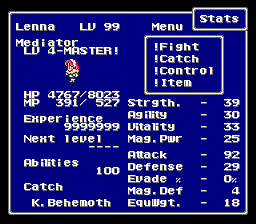 When a character catches a monster in the Super Famicom version, the enemy name should be displayed on the Status menu under the Catch header, but the field is left blank for the version 1.1 of the RPGe translation. The reason is because the enemy names table was stored in another location within the data. Also, the length of the monster names was originally 8 bytes, but was expanded to 10 bytes.

Captured monsters can be released to have them attack once, summon style. If the party catches a summoned creature, most will do a Strong Attack when released (which does thousands worth of damage, even in the First World).

The Equip Whips support ability gives characters the Beastmaster's base Strength and Agility unless otherwise already at a higher value.

Calm is bugged in the SNES, PS and GBA versions; it is effective against enemies that are not Magic Beasts.

Upon mastery, Freelancers and Mimes gain the Beastmaster's base Strength, Agility and Stamina unless they already have a higher base from another mastered job.

[view · edit · purge]A mediator is a person who engages in mediation.