Satoshi Nakai
Baugauven is a fire-elemental Eidolon from Final Fantasy Dimensions II. He can be obtained as a signet for Morrow to equip as a first-time completion reward for the "Mog Net" side quest at the Atomos Gate.

Baugauven provides Morrow with a significant increase in his stats, especially with the summon's boosts in HP and attack. The signet's Firaga Blast provides Morrow with a strong fire-elemental physical attack that is excellent for handling enemies weak to fire attacks and supporting the party with its additional effects of boosting the party's attack and restoring a small amount of their HP. Its unlockable passive of boosting Morrow's fire-elemental damage output by 16% allows him to deal heavy damage easily against enemies weak against fire attacks. Baugauven's signet is excellent to use until the game's sixth chapter of the game's Crystal of Time arc.

In the original free-to-play versions, Baugauven's signet could only be obtained through the game's summon draw shop and could be equipped by any party member. The signet was identical to the premium version, allowing the wielder to use Firaga Blast abilities.

Baugauven is based on one of the Four Generals of Avalon from the first Final Fantasy Dimensions. His artworks are based on the design of his boss sprites from his original game. His final artwork depicts him in his monstrous undead form after he is revived by the Nil, with his flaming snake familiar coiling around him in a protective stance. His Final Backdraft summon attack was his special ability used as his final attack during boss encounters in his original game.

Baugauven's summon attack is Final Backdraft, which inflicts moderate fire-elemental damage to all enemies and lowers their attack for three turns. Summoning Baugauven costs 2 bars from the Summon Gauge.

The following are the abilities Morrow can learn from Baugauven: 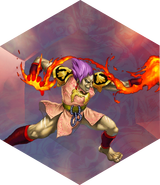 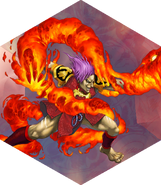 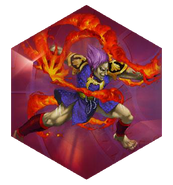 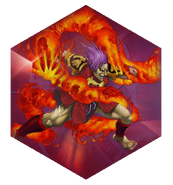