Cid Pollendina: Oh, shut up and help me remodel the Baugauven page!
Please expand this article into a full one. The following tasks need to be completed:

Filthy criminals, trying to snatch our warship! But I suppose even the accused should know their accusers. I am Baugauven of the Flame, one of Avalon's four generals.

Baugauven to the Warriors of Light

Baugauven, ever cocky and warlike, is known by friend and foes alike as the Explosive Berserker. His command over the Empire's special forces leave no doubt as to the power he wields, and his "Final Backdraft" attack leaves his enemies scorched into lifeless husks.

Baugauven is one of the Four Generals in Final Fantasy Dimensions.

Baugauven is a tan, purple-haired man who is clothed entirely in red. He wears a simple tunic that is held in place by a golden belt and blue cord, scarlet gloves that extend to the mid arm, and military boots that leave his feet partially exposed. Baugauven dons a long cape, which is held in place by two gold pauldrons, and has a circular white marking on his forehead, reminiscent of the Hindu bindi. In his Awakened form, Baugauven retains most of his previous attire, but part of his cape transforms into a fiery, serpentine creature with eyes and a beak-like mouth. In his final, undead form, he becomes heavily muscled, loses his boots and gloves, and his flaming snake familiar coils around him in a protective stance.

To his subordinates and to the Warriors of Light and Darkness, Baugauven is a callous and bellicose man interested only in the martial affairs of the Avalonian Empire, unto which he serves willingly. He frequently demonstrates a lack of regard to human life at distinct moments in the story, such as his genocide of the Dark Knights at Castle Falgabard, and his readiness to kill Sol, Aigis, Sarah and Dusk when on board the airship that they stole. Furthermore, when it becomes apparent during the dragon's raid on the ship that it is about to fall out of the sky and crash, Baugauven decides to evacuate in the hopes that they will be killed in the collision, effectively dooming every Avalonian soldier on board as well. Cruel and unsympathetic, Baugauven derives pleasure from telling the Warriors of Darkness that their friends and family were killed in the crash, but succumbs to a brief moment of fear before being killed by Graham's Zantetsuken.

Prior to the story, Baugauven lead a attack on the village of Falgabard, killing Nacht's father, Sigurd, and his friend Graham.

When Avalon ends its alliance with Lux, Baugauven is deployed to retrieve the Avalonian airship that Sol and his friends stole. Easily overpowering them, Baugauven decides to end the fight with his Final Backdraft attack. However, Elgo takes the full blunt of the attack, shielding the rest of the party from damage. Before he could kill the others, Baugauven is forced to fall back when a group of wyverns under Barbara appear and overwhelm the Imperial soldiers. He abandons the crashing airship, believing the warriors of Light to have perished in the crash. 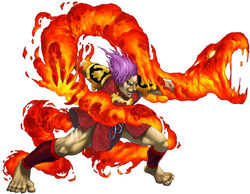 Baugauven is a fire-elemental Eidolon. He can only be equipped by Morrow and teaches him Firaga Blast abilities. His summon attack is Final Backdraft, which deals fire-elemental damage to all enemies and lowers their attack for three turns.

Baugauven appears with a fire-elemental card.