Cid Pollendina: Oh, shut up and help me remodel the Battle theme page!
Please expand this article into a full one. The following tasks need to be completed:This request can be discussed on the associated discussion page. Remove this notice upon completion. 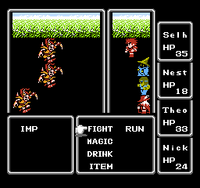 Most Final Fantasy titles in the series have a regular battle theme, most often affiliated with a generic random encounter.

A recurring feature in the earlier titles is that each battle theme starts almost identically, with the same two measures of eighth notes repeated in the bass clef twice before the main melody of the piece joins it in the treble clef in its third measure.

The normal battle theme is simply called "Battle". In the original Famicom release, this battle theme is played in every battle, with subsequent remakes and ports using remixes of this theme for boss battles.

"Battle 1" is the main battle theme. Electric guitar sections are added in the Pixel Remaster release.

For the second time in the series, the main battle theme is named "Battle 1".

The same battle theme from Final Fantasy IV is used for battles.

Like Interlude, the same battle theme as the original Final Fantasy IV is used.

The battle theme is "Battle 1", also known as "The Battle".

It plays in most random encounters throughout the game. It also plays in the superboss encounter against Omega.

The battle theme is known as "Let the Battles Begin!", but it has several other titles, such as "Fighting!" or "Those Who Fight", and is the first battle theme with a distinct introduction compared to previous titles.

"Combat" plays during some battles. "Howling Abominations" is the battle theme of the final dungeon, Banora Underground.

The battle theme is known as "Don't Be Afraid", and is one of the few themes written for any Final Fantasy title in the 5/4 time signature. This theme is replaced by "The Man with the Machine Gun" during the dream sequences involving Laguna and his friends, Kiros and Ward.

The battle theme is known as "Battle 1". The introduction hearkens back to that of the battle themes of the first six installments of the series.

The battle theme is known as "Battle Theme".

"Battle Theme" is the theme played whenever the player does battle in the field. It is composed by Naoshi Mizuta.

Because all battles are held in the field, there is no official battle theme. However, "Clash of Swords" was intended to be before it was then relegated to being a theme for some minor bosses.

There are two main battle themes to represent Serah Farron and Noel Kreiss, which are "Paradigm Shift" and "The Last Hunter".

This section about an album in Lightning Returns: Final Fantasy XIII is empty or needs to be expanded. You can help the Final Fantasy Wiki by expanding it.

The version 1.0 version uses different battle themes for each territory in the game; "Nail of the Heavens" for La Noscea, "The Forest's Pulse" for the Black Shroud, "Quicksand" for Thanalan, "Pennons Aloft" for Coerthas, and "Phantoms on the Lake" for Mor Dhona.

In A Realm Reborn, the regional battle themes now have the same tune with the instruments varying. "The Land Breathes" is used for battles in La Noscea, "The Land Bends" in the Black Shroud, "The Land Burns" in Thanalan, "The Land Breaks" in Coerthas, and "The Land Bleeds" in Mor Dhona.

In Final Fantasy XIV: Heavensward, all the new areas except Azys Lla, which plays no separate battle theme, have a new battle theme called "Melt".

In Final Fantasy XIV: Stormblood, all new areas have a battle theme called "Looping in the Deepest Fringes".

In Final Fantasy XIV: Shadowbringers, all new areas with the exception of the Tempest, which, like Azys Lla has no battle theme, have a battle theme called "Rencounter".

Daemons and Niflheim enemies have their own battle themes. "Daemons" plays when encountering the former during most of the game, with "Neverending Nightmare" replacing it later on. Battles with Niflheim enemies play "Veiled in Black" (which also played when fighting daemons in Final Fantasy XV Episode Duscae), while battles with them in Niflheim territories play "Veiled in Black (Arrangement)" instead.

Gralea and Insomnia also have their own battle themes, which play regardless of the enemy type fought.

"War: Warrior Worth a Thousand"

The game features several battle themes, with "War: Warrior Worth a Thousand" serving as the main battle theme for random encounters on the overworld map.

The normal battle theme is "Battle with Demons". It is track number 7 on the original soundtrack.

"DUEL!!" is the battle theme for most regular enemies and battle stages.

A piano arranged medley of the battles themes from the first three Final Fantasy games appears on this album.