Battle for the Frozen Esper

Battle for the Frozen Esper
Part of the Third Gestahlian Campaign

Battle in the clifffs above Narshe.

Heavy, entire invading force save for Kefka destroyed.
Few, possibly some Narshe guards.
The Battle for the Frozen Esper is a conflict between the Gestahlian Empire, and the joint forces of Narshe and the Returners, for the possession of a recently discovered esper in the mining city of Narshe in Final Fantasy VI. It is the first known decisive defeat suffered by the empire, after a series of victories in South Figaro and Doma, respectively.

The Empire has shown interest in Narshe following the discovery of an esper in the Narshe Mines, and seeks to capture it to obtain another source of Magitek power. Following an unsuccessful raid, which resulted in the deaths of two Magitek Armor soldiers, the Empire sends a larger invasion force to both capture the esper and to punish Narshe by destroying the town.

Banon, leader of the Returners, realizes it is critical for the survival of the rebellion to thwart the plan, and leads a relief force to Narshe's aid. Before they can depart the Empire attacks the Returners' Hideout and the party is split. They reunite at Narshe and prepare for the upcoming fight.

Having for long believed that neutrality provides safety from the Empire, the Elder of Narshe turns down repeated requests by the Returners to join them in their struggle. When Imperial forces are spotted, he accepts help from the Returners to fend off the attack.

The attack is led Kefka Palazzo, an imperial general, who orders for the troops to do whatever it takes to get him the esper. The Imperial forces are reluctant to attack Narshe, both because of its civilian population, and it being neutral, but Kefka tells them to kill everyone. While Narshe guards are stationed to defend the town the Returners face Kefka's troops on the cliffs above Narshe to protect the esper. Kefka recognizes Celes, a former Imperial general who defected to the Returners for reasons implied to be related to Kefka's poisoning of Doma.

The Returners defend Banon, as if any Imperial troops reach him the battle is lost. After defeating the Imperial troops, the Returners face a Hell's Rider. Once defeated, they turn on Kefka. After a brief skirmish Kefka flees, swearing revenge.

With the Imperial threat gone, the Returners hurry to the site of the esper where Terra reacts to its presence and transforms into an esper herself, taking flight and heading north-west. Up to four Returners depart for Kohlingen in search of her, while the rest stay behind to defend Narshe in case of future attacks.

Narshe residents are furious over the unprovoked attack, with some blaming the esper for their trouble with the Empire. Future attacks are feared, and the Returners station at least two fighters in Narshe to help protect the town. The Elder of Narshe accepts his policy of neutrality has failed, and contemplates on what to do next. He eventually concludes that war has become inevitable, and agrees to support the Returners in a joint attack on the Imperial capital of Vector.

The battle represented the first major defeat suffered by the Gestahlian Empire in its military campaign. Humiliated and furious, Kefka vows to exact revenge for his defeat. Although it is never directly stated, it is possible the town became one of the first targets of Kefka's Light of Judgment, as it is overrun by monsters and abandoned following the cataclysm.

"Protect the Espers!" plays during the sequence of the battle for the frozen Esper.

The scattered allies regroup in Narshe just as an Imperial force led by Kefka attempts to seize the esper. It falls to Terra and her allies to defend the town.

There are seven placed sprites that can be found on the map of Narshe, specifically the map of the cliff above the snowfield. These sprites are compose of six Imperial soldiers and Kefka. An event would have played out when the player lost the battle, where Kefka goes to retrieve the frozen esper, but it never got put into the game. 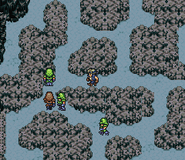 Battle for the Frozen Esper.

Kefka and his army marching towards Narshe.

Locke warning everyone of the incoming attack.

Elder of Narshe accepting help from the Returners.

Kefka's army getting ready to attack.

Battle for the frozen esper.

Kefka vowing to exact revenge for his defeat.

Terra reacting to the esper.

Kefka and his army marching towards Narshe.