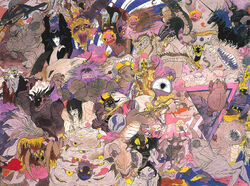 The standard battle music in FFII. Listen for that familiar intro and your nerves will tingle with nervousness as the exotic melody builds up around you!

In the original NES version, "Battle Theme 1" is used as the main battle theme, and is also used as the battle theme for some minor boss battles: Sergeant; Adamantoise; and Emperor. It is the twenty-third track of All Sounds of Final Fantasy I & II, the game's first soundtrack.

In the WonderSwan Color version, "Battle Theme 1" and "Battle Theme 2" were remastered and further arranged into new themes to serve as boss themes by Tsuyoshi Sekito. "Battle Theme A" is the arrangement of "Battle Theme 1" and is used for several mid to late-game bosses: Lamia Queen; the Fire, Ice and Thunder Gigas; King Behemoth; the set encounters with each of the Dragons; the bosses at Pandaemonium and Arubboth; Ultima Weapon; and the boss of the Anniversary edition's Arcane Labyrinth: Phrekyos.

"Battle Theme 1" became the fifth track of the original soundtrack; while "Battle Scene A" is its twenty-sixth track.

"Battle Theme 1.X" is an arrangement that plays during the boss battle against Raucous Bodyguard, Boastful Bodyguard, and Filthy Bodyguard for the quest "Into a Copper Hell" in Ul'dah. It also plays in the FATE needed for the Hildibrand questline.

The original version and the Dissidia Final Fantasy arrangement appear in the music player. The original is the opening track of Memories of FFII purchased from Longwythe Rest Area for 100 gil. "Battle 1 -arrange- (from FINAL FANTASY II)" appears as part of the Memories of DISSIDIA FF album bought from Old Lestallum for 500 gil.

"Battle Theme 1 -arrange- from FINAL FANTASY II" in arrangement by Takeharu Ishimoto. It is the eleventh track of the original soundtrack's first disc.

The track is used as the default themes for battles including Firion or the Emperor, or any battle with Pandaemonium as the arena.

The Dissidia-arranged version the default battle theme for battles including Firion or the Emperor, or any battle with Pandaemonium as the arena.

The Dissidia-arrangement and the original NES version can be bought from the shop for 3,600 gil.

"Battle Theme 1" is a battle track for Final Fantasy II, available in the base game.

"Battle Theme 1" is a Battle Music Sequence that is available by default.

"Pop-Up Duel" in arrangement by Yuzo Takahashi appears as the thirtieth track of the original soundtrack album.

"Battle Scene 1" is included in the piano "Battle Medley [FINAL FANTASY I/II/III]" along with "Battle" and "Battle 1" from Final Fantasy and Final Fantasy III, respectively. It was arranged by Hiroyuki Nakayama and is the ninth track of the album.

"Battle Theme 1" is the second song of the final track of this album, "Battle Medley 2012 (Final Fantasy I – XIV)", arranged by Hiroyuki Nakayama.