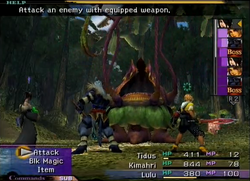 This is the main battle theme of FFX. The staccato melody of the trumpets and the measured tempo remind one of unshakeable strength and faith.

"Battle Theme" (ノーマルバトル, Nōmaru Batoru?, lit. Normal Battle) is a battle theme from Final Fantasy X. It was composed by Nobuo Uematsu. The track is one of numerous tracks on the soundtrack that was redone for the Final Fantasy X HD Remaster.

"Battle Theme" is the normal battle theme. It is the ninth track on the first disc in the original soundtrack.

For Final Fantasy X HD Remaster, "Battle Theme" was remastered by Nobuo Uematsu and Tsutomu Narita using real instruments. It received an orchestrated metal arrangement. "I wanted to rearrange the song to have a grander sound while maintaining the mood of the original at the same time," Narita said of the big-band-like upscaling to the "Normal Battle" theme. "Brass and string instruments were already important elements of the original song, so we decided to expand into a full orchestral piece by adding other instruments as well."[1]

"Battle Theme" is included in the music player as the opening track of Memories of FFX album bought from the Wiz Chocobo Post for 100 gil.

"'Battle Theme -original-' from FINAL FANTASY X" appears as a track that may sometimes play in the Dream's End stage, or during fights in which Tidus and/or Jecht participates.

""Battle Theme -original-" from FINAL FANTASY X" is a battle theme that plays in the Dream's End stage, or during fights in which Tidus Jecht, and/or Yuna participates.

An arrangement of "Battle Theme" was composed by Takeharu Ishimoto. It appears as a default theme. The original PlayStation 2 version is also available. Both can be bought from the shop for 3,600 gil.

"Battle Theme" is a Battle Music Sequence. It is available in the base game, and does not require a purchase to play.

"Battle Theme" is a playable Battle Music Sequence. It is available to the player by default.

An 8-bit arrangement of "Battle Theme" is mixed with the "Victory Fanfare" in a track called "Normal Battle ~ Victory Fanfare". Arranged by W2X, it is third track on the disc.