A battle axe with a long handle. Designed for two-handed use, it can easily chop off an enemy's limbs.

Battle Axe (バトルアクス, Batoru Akusu?), also known as Battle Ax, Battleaxe, or Battle, or Hand, is a recurring weapon in the series. It is usually the game's starting axe or is otherwise a low-level axe. It is normally wielded by the Berserker class, or by heavy melee classes such as Paladin or, in rare cases, Dragoon. It usually never has any special abilities or effects.

An axe made for battle.

Battle Axe (Hand on the NES) is the weakest axe, and can only be used by Warrior, Knight, and Ninja. It has an Attack of 16 and Accuracy of 5, and can be bought in Pravoka for 450 gil (Dawn of Souls and 20th Anniversary versions) and 550 gil (in older versions).

An axe tempered for battle.

The Battle Axe is the second weakest axe, with the Axe being the weakest axe. It is bought for 800 gil at Bafsk and Salamand, and has an Attack of 15, Accuracy of 45%, and Evasion of 2%.

Battle Axe is used by Kain, Luca, Golbez, and Gekkou. It provides 62 Attack, +3 Strength, and -3 Intelligence and Spirit. It can be bought in Baron for 2500 gil (with Kain) or made in Kokkol's Forge during Rydia's Tale.

Axe made for combat. Can be used two-handed.

Battle Axe is the weakest axe with an Attack of 20. It can only be used by the Freelancer, Berserker, and Gladiator, or those who have the Equip Axe ability equipped. It can be bought in Walse for 650 gil or stolen from Bio Soldier.

Battleaxe is an axe that provides 20 damage and 276 delay. It deals 4.35 damage per second and accumulates 73 TP per hit. It can be equipped by level 20 Warrior, Dark Knight, Beastmaster, Ranger, and Rune Fencer.

Battle Axe is the weakest axe, and can be bought in Chapter 1 for 1,500 gil or poached from Wisenkin. It has a measly 9 Attack power. It does a randomized amount of damage that depends on the power of the character using it, and is two-handed.

Battle Axe is a low-ranked axe that boosts Strength by 8 and Range by 3, but lowers Agility by 1.

An unwieldy ax made for war. It takes time to master.

Battle Axe is the second level axe and is found in Fireburg. It has an Attack of 62.

Battle has an axe icon before its name. The Battle is the first axe, bought for 150 GP at the item shop near the marshes. It has an attack power of 8.

Battle has an axe icon before its name. It is the weakest axe with an attack power of 20. It can bought for 500 G at Lae in the Past. The player can get one for free during the introductory battle, have Myron enter his item menu and remove his weapon. When the fight is over and the player resumes control, Myron will now be the 5th party member and the inventory will have an extra Battle.

The Battle Axe is one of Gilgamesh's eight weapons, used at random when he attacks and in his EX Mode. It inflicts a random amount of Bravery damage when used.

A metal axe that was designed for combat and takes defense into consideration as well.

An axe used for ordinary tasks that was enhanced to serve as a weapon on the battlefield. In ancient times, the axe was a necessary tool for daily life activities, such as chopping wood. It is believed that its implementation as a weapon at the time stems from how instinctually users would draw this reliable tool when surrounded by beasts or enemies. However, being heavier than a sword, using it requires broad swings that unfortunately reduce accuracy.

Battle Axe is an axe that provides 28 ATK. It can be bought for 1,800 gil at Royal Capital Grandshelt, crafted using 360 gil, Iron Ore x10, and Lumber x3, and found at Grandshelt Catacombs.

An axe designed for fighting.

The Battle Axe appears as an axe within the Forsaken Dungeon. It has a 34 Weapon Atk, 12 Durability, -2 Speed, and -2 Consumption Rate.

Battle Axe is a hammer that can be equipped by Kamo. 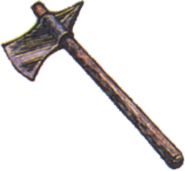 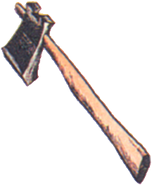 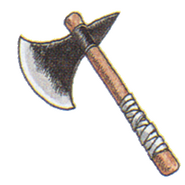 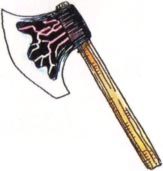 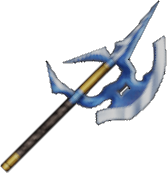 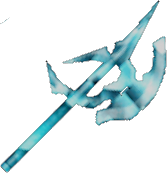 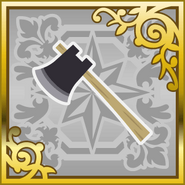 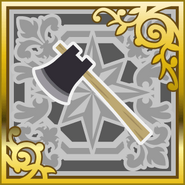 A battle axe is an axe specifically designed for combat. Battle axes were specialized versions of utility axes. Many were suitable for use in one hand, while others were larger and were deployed two-handed.