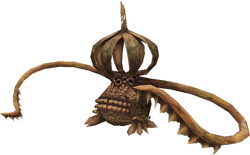 The song used in FFIX for boss fights, its low piano notes urge you on as the tense beat continues relentlessly. One can easily imagine a fierce battle raging.

"Battle 2" (バトル２, Batoru 2?) is the boss theme of Final Fantasy IX. It was composed by Nobuo Uematsu.

"Battle 2" acts as the boss theme. It is the 21st track of the first disc.

"Battle 2" appears in the music player as the third track of Memories of FFIX (Disc 1) - OST album purchased from Coernix Station - Cauthess for 100 gil.

""Battle 2 -original-" from FINAL FANTASY IX" appears as a battle theme. It is the 11th track of the second disc.

"Battle 2" reappears as a battle theme.

"Battle 2" recurs as a BMS for Final Fantasy IX, this time available in the base game.

"Battle 2" is mixed into "Battle 1 ~ Battle 2 ~ Fanfare". Arranged by mochilon, it is the fourth track on the disc.