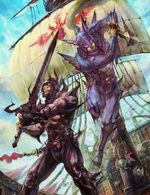 Battle 1 (バトル1, Batoru1?) is the main battle theme of Final Fantasy IV. It was composed by Nobuo Uematsu.

In its debut, "Battle 1" is the background theme for random encounters starting when Cecil Harvey and Kain Highwind travel to Mist per order of the King of Baron. It is the eight track of the Original Sound Version.

"Battle 1" was rearranged by For the 3D release by Junya Nakano. This version was released as the ninth track of the original soundtrack.

In Final Fantasy IV: The Complete Collection, the player can choose which version to hear by selecting either the original or remastered soundtrack.

The remastered version of "Battle 1" from the 3D remake of Final Fantasy IV is used as the main battle theme.

The original SNES version plays as the battle theme in Bestways Burrow, located at Mare Lamentorum.

The original version appears in the music player as the third track of Memories of FFIV purchased from Hammerhead for 100 gil. The Dissidia 012 Final Fantasy arrangement is available on the Memories of Dissidia 012 FF album purchasable from Old Lestallum for 500 gil.

"Battle 1 -arrange-" from FINAL FANTASY IV" is an arrangement by Rieko Mikoshiba. It is the sixteenth track of the original soundtrack.

The track can be automatically selected for battles including Cecil Harvey, Kain Highwind or Golbez, or any battle with the Lunar Subterrane as the arena.

The Dissidia 012 arrangement and the original SNES version can be bought from the shop for 3,600 gil.

"Battle 1" appears as a bonus Battle Music Sequence track from the Chaos Scores. In order to be played, it must be unlocked by the cost of 30000 Rythmia. The theme is included in Theatrhythm Final Fantasy Compilation Album.

"Battle 1" is a Battle Music Sequence.

"Battle 1" is a playable Battle Music Sequence. It is available by default.

A piano arrangement of "Battle 1" is included in the twelfth track of this album, a medley of the battle themes of Final Fantasy IV named "The Battle". It was arranged by Shirou Satou.

The track appears in the arrangement album featuring battle tracks from several Square Enix games. It is the first part of the mash up with "The Final Battle", also from Final Fantasy IV.