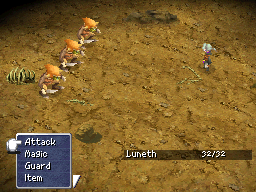 The main battle theme of FFIII. After the traditional intro of all the early FF battle songs, its melody grows as brave as the heroes who fought to its strains.

"Battle 1" (バトル１, Batoru1?) is the main battle theme from Final Fantasy III. It was composed by Nobuo Uematsu.

"Battle 1" is first heard at the forced encounter against the Goblins at Altar Cave. After that, it is the battle theme for every random encounter. This track is number 3 as "Battle 1 ~ Fanfare" in the Original Sound Version, the first soundtrack.

As with the rest of the soundtrack, "Battle 1" was rearranged for the 3D version, was released as part of the original soundtrack, of which it is the fourth track.

"Battle 1 -arrange-" from FINAL FANTASY III" in arrangement by Tsuyoshi Sekito and appears as a battle theme.

The track can be automatically selected for battles including Onion Knight or the Cloud of Darkness, or any battle with the World of Darkness or the Crystal Tower as the arena.

The Dissidia 012 Final Fantasy arrangement and the original NES version can be bought from the shop for 3,600 gil.

"Battle 1" is a Battle Music Sequence, available in the base game.

"Battle 1" is a Battle Music Sequence that is available by default.

"Battle 1" concludes the second song of the album, "Following the Wind". This arrangement was produced by Nobuo Uematsu and the narration was performed by Jeff Levy.

"The Rocking Grounds" is an hard rock rearrangement of "Battle 1" that serves as the very first track of the the Black Mages' second studio album.

"Battle 1" is included in the piano "Battle Medley [FINAL FANTASY I/II/III]". It was arranged by Hiroyuki Nakayama and is the ninth track of the album.

The Black Mages' "Rocking Grounds" was the first song performed at their 2005 concerts at Club Citta in Kawasaki City, Japan and Namba Hatch in Osaka City, Japan.

The Black Mages performed "Rocking Grounds" at this concert at the Gibson Amphitheater - Los Angeles, California, United States of America, in May 16th, 2005. It was the eight song of the concert's line-up.

"Battle 1 ~ Fanfare" is included on the second disc of this collector's edition set. The track includes the battle theme and the victory fanfare.

An electric-guitar arrangement of "Battle 1" is included in this crossover between Final Fantasy and Dragon Quest for the PlayStation Portable. During the introduction, its background is similar to the remastered of "Battle 1" for the 3D release of Final Fantasy III.