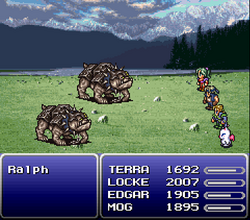 The main battle theme of FFVI. From the familiar intro, the drums crash in and trumpets soar in this rock-inspired and fiery battle song!

Battle (戦闘, Sentō?), also known as "Battle 1" or "Battle Theme", is the main battle theme of Final Fantasy VI. It was composed by Nobuo Uematsu in 1994.

"Battle" plays as the background theme in most random encounters, and first plays in the forced encounters with the Guards in Narshe. It was released as the fifth track of the first disc of the Original Sound Version; and of the Kefka's Domain album.

An arrangement of this theme by Takeharu Ishimoto named "Battle 1 -arrange- from FINAL FANTASY VI" appears as a battle theme. It is the twenty-fourth track of the Dissidia 012 Final Fantasy Original Soundtrack first disc.

"Battle 1" can be automatically selected for battles including Terra Branford or Kefka Palazzo, or taking place at the Phantom Train or Kefka's Tower.

The Dissidia 012 arrangement and the original SNES version can be bought from the shop for 3,600 gil.

"Battle" is a Battle Music Sequence for Final Fantasy VI, it available in the base game.

"Battle" is a playable Battle Music Sequence that is available by default.

"Battle Theme" by The Black Mages

"Battle" was arranged by The Black Mages and included in their first, eponymous album as the sixth track, titled "battle theme".

The Black Mages's arranged "battle theme" from their debut album was performed live at this 2003 concert that took place at Shibuya-AX and Kanagawa University. It was the third song of the line-up.

The Black Mages' "battle theme" was again performed at their 2005 concerts at Club Citta in Kawasaki City, Japan and Namba Hatch in Osaka City, Japan. It was the fourth song of the concert.

An arrangement of "Battle" is included in this crossover between Final Fantasy and Dragon Quest for the PlayStation Portable.

An arrangement of this song is included on the Final Fantasy VI music medley by Tsuyoshi Sekito.