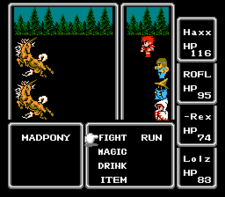 "Battle" (戦闘シーン, Sentō Shīn?, lit. Battle Scene), "Battle Scene" or "The Scene of Battle", is the battle theme of the original Final Fantasy. It was composed by Nobuo Uematsu.

In the original NES version, "Battle" is the only battle theme, playing in every battle including Chaos. It is the seventeenth track of the first disc on All Sounds of Final Fantasy I & II, the first soundtrack.

In the Wonderswan Color version, "Battle" was remastered and further arranged into four different themes, which would play at the various boss battles: "Miniboss Battle", "Boss Battle A", "Boss Battle B", and "Final Battle", all arranged by Nobuo Uematsu. "Battle Scene" became the nineteenth track of the original soundtrack.

It is the 3rd track in Shadowbringers: Final Fantasy XIV Original Soundtrack.

The theme is included in the music player. It is available since the beginning as part of the Memories of FF album and the Dissidia arranged version is on the Memories of DISSIDIA FF album purchased from Old Lestallum for 500 gil.

"Battle -arrange- from FINAL FANTASY I"

"Battle -arrange- from FINAL FANTASY I" is an arrangement by Tsuyoshi Sekito. It is the eighth track of the original soundtrack's first disc.

The track is used as the default themes for battles including Warrior of Light and Garland, or any battle with the Old Chaos Shrine as the arena.

"Battle -arrange- from FINAL FANTASY I" is a battle theme.

The original NES version of "Battle" is also part of the Final Fantasy Music Pack DLC distributed through the PlayStation Network. It is automatically selected for Arcade and Quick Battles featuring the Warrior of Light, Garland or taking place at the Old Chaos Shrine.

The original NES version and Dissidia arrangement appears battle music, called "The Scene of Battle" on the soundtrack.

"Battle" was selected as the Battle Music Sequence for the Final Fantasy Series play. The theme appears on Theatrhythm Final Fantasy Compilation Album.

This section about an album in Theatrhythm Final Fantasy All-Star Carnival is empty or needs to be expanded. You can help the Final Fantasy Wiki by expanding it.

"Prismelody: The Scene of Battle"

"battle theme" is a remix of "Battle" and appears as the background music of card battles. It is the twenty-fifth track of the original soundtrack.

"Battle Scene" by The Black Mages

"Battle" is included in the piano "Battle Medley [FINAL FANTASY I/II/III]". It was arranged by Hiroyuki Nakayama and is the ninth track of the album.

"Battle" is the first song of the final track of this album, "Battle Medley 2012 (Final Fantasy I – XIV)", arranged by Hiroyuki Nakayama.

The Black Mages's arrangement of "Battle" from their debut album was performed live at 2003 concert that took place at Shibuya-AX and Kanagawa University. It was the fifth song of the line-up.

The original version of the "Battle Scene" was included in this compilation, of which it is the first track.