A bathing suit (水着, mizugi?) is a costume worn for swimming or for beachwear in the real world, but commonly appears as an optional "fan service" outfit in JRPGs that may not even have anything to do with swimming or the beach. Sometimes bathing suit outfits are altered for international releases. They are usually bonus outfits the player can wear optionally, or appear in only certain scenes in the game. Bathing suits are usually cosmetic, although beachwear "armor" also exists.

Zack Fair and Cissnei wear bathing suits in Costa del Sol on Zack's holiday there. While in this outfit, Zack will fight with the parasol rather than his sword. A parasol or an umbrella is a joke weapon associated with Aerith Gainsborough in Final Fantasy VII. The player can return to the beach scene in the "Fun in the Sun" missions.

Zack wears black shorts with a white cord and a yellow design on the left. Cissnei wears a pale yellow bathing suit with blue details.

Rikku's default appearance is the Thief dressphere that has her wear a yellow bikini with a miniskirt, scarf and sleeves. All the girls also have swimsuit models for a missable hot springs scene on Mt. Gagazet; if the party takes a certain route through the mountain, the girls decide to go swimming.

Though not appearing, a piece of artwork by Hideo Minaba exists showing Ashe in a bikini with a topless Basch. Ashe's bikini is based on her regular outfit with the same colors and shapes. 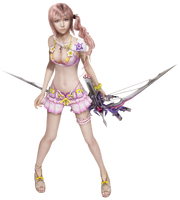 A new outfit for Serah. The perfect costume for soaking up the sun and hanging out with friends on the shores of New Bodhum.

Serah's Beachwear attire is available as downloadable content. Serah lives in the tropical seaside village of New Bodhum, and the Beachwear outfit was designed to go with that theme. It is the first downloadable bathing suit attire in the series. It changes Serah's appearance on the field and in battle, but has no effect in gameplay.

It is a lavender pink frilly bikini with yellow details. She wears sandals with it. It has a shoulder guard and a garter belt on the left side of her body.

The beachwear attire appears as an armor in Final Fantasy Record Keeper.

Lightning can wear various garbs, some of them being bikinis. The bikini garbs tend to boost Lightning's magic and elemental resistance, and make her a mage-type fighter.

The player can style their character as they please, with swimsuit options available. The Moonfire Faire is a seasonal event held every year during summer in the north hemisphere that offers players unique rewards, such as swimsuits.

In the HD version, Kazusa's swimsuit model and Emina's lingerie model were removed from the Historical Personae. They were viewable as alternate outfits in the Rubicus after completing the characters' sidequests in the PlayStation Portable version. Emina is said to collect swimwear and lingerie.

Though not explicitly defined as a bathing suit, the Cloud of Darkness wears a red and black two-piece bikini with their cape and gloves by default.

In addition to the Cloud of Darkness, Leila can be observed in a two-piece bikini with several decorative pieces on her arms.

The Bravo Bikini is a key item and a piece of swimwear created by Sage Yulyana. It is usable as an in-game outfit after defeating Fiore DeRosa a second time in Chapter 5 or 6. It was censored in the English version.

Swimsuit is an armor set.