Cures status ailments that wear off after battle.

Basuna (バスナ, Basuna?, lit. Basna) is a recurring White Magic spell. It cures status effects that normally wear off over time or at the end of a battle.

Basuna is a White Magic spell. At level 1 the spell will only be able to remove the Venom status. At level 2 Basuna will be able to heal Sleep, Silence can be removed at level 3, Mini at level 4, Paralysis at level 5, and finally Confuse at level 6.

In addition the chance of success increases as the level of the spell increases. It can target one ally or all allies, but the latter requires an additional level in order to remove the status (for example level 4 or higher to remove Silence) and the success rate is much lower unless the spell is at a high level. Any character can learn Basuna by having them use the Basuna Tome (Basuna Scroll in Final Fantasy Origins).

Basuna is usable via the Mythril Staff. It effectively acts as a Unicorn Horn by removing Berserk, Confuse, Sleep, and Paralyze, but only targets one character. The spell is classified as a white magic spell in the 3D remake.

Basuna is a Item Magic spell via the Mythril Staff. It removes Berserk, Confuse, Sleep, and Paralyze on one target.

Basuna is usable via the Mythril Staff. It removes Berserk, Confuse, Sleep, and Paralyze on one target.

Basuna is a white magic spell, usable by characters who have learned how to cast level 4 or higher white magic. It must be purchased for 1500 gold before anyone can cast it. It costs 10 MP and removes Berserk, Confuse, Sleep, Paralyze and Curse from a single target. 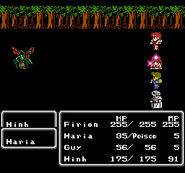 Basuna cast on the party in Final Fantasy II (GBA).

Basuna cast on the party in Final Fantasy II (PSP). 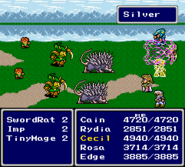 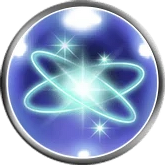 This gallery is incomplete and requires Final Fantasy IV: The After Years (Wii) added. You can help the Final Fantasy Wiki by uploading images.