Cid Pollendina: Oh, shut up and help me remodel the Bastardo page!
Please expand this article into a full one. The following tasks need to be completed:This request can be discussed on the associated discussion page. Remove this notice upon completion.

Prismatic God of Flame and Fury

Fire
Bastardo is a non-playable character that appears during the "Eureka" arc of Final Fantasy Dimensions II. He is the Prismatic God of Flame and Fury from the land of Eureka. He serves as a minor antagonist during the events of the arc.

When not in battle, Bastardo often appears as a tall red-skinned muscular man. He wears darksteel armor throughout his body, with his horned helmet covering a majority of his face.

However when engaged in combat, Bastardo becomes a massive centaur-like giant. He has six legs in this form and grows a tail. In addition, his armor spreads apart to expose his bottom torso and his face becomes visible through his helmet. Lastly, he wields a massive crimson broadsword in battle.

Despite his appearance, Bastardo normally is levelheaded and seeks to stop any confrontation between his fellow Prismatic Gods. However, when Bastardo is pushed to his limits and becomes enraged, he becomes violent and often goes full force when fighting. Like Spirale, he also sees humans as inferior and cowardly. However, to those who exceed his expectations in or out of battle, he will often acknowledge their strength. 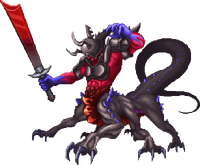 Lastly, he is also fought as a superboss on the 40th floor of Babil Tower. 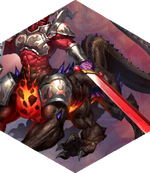 In the original free-to-play versions, Bastardo only appeared as a boss.

Like a majority of the other Prismatic Gods, Bastardo was initially introduced to the game as a raid exclusive boss during the game's time as Final Fantasy Legends: Toki no Suishō. In this content, he served as the main boss of the "Bastardo the Crimson" raid event and was a DPS race-type boss for players to complete before the turn counter was up. These encounters with Bastardo required the players to defeat his legs and his main body. Multiple reprints of the event were available as a filler-type event in Final Fantasy Legends II.

Bastardo, along with the other Primatic Gods, would not receive a proper introduction into the game's story until the release of the "Eureka" arc in the relaunch of Final Fantasy Legends II. Introduced in the game's third "Eureka" update, his role in the story was the same as the premium version. However, his boss encounters did not occur during the "Eureka" arc, due to the storyline being solely dialogue based in the free-to-play versions.

In the premium version of the game, Bastardo's appearance in the "Eureka" arc was expanded to include multiple boss encounters with him. In addition, a new boss fight against him was added into Babil Tower. These battles removed the original multi-target mechanics from his raid appearances in the free-to-play versions.

Lastly, a fire-elemental signet of Bastardo was added into the premium version of the game for Parai.