Bashura is a fiend in Final Fantasy X encountered on Mt. Gagazet and in the Zanarkand ruins.

Like its weaker cousins, Bashura uses physical attacks; it has a chance to use a stronger physical attack with perfect accuracy that always targets the party member with the lowest HP, and will also use it when Provoked. Once it raises its fists after falling below 50% HP, it will skip all its turns and counter any physical attack from party members; its counterattack is also stronger than its regular attack and has perfect accuracy. It will not counter aeons or when under the Threaten effect, and will lower its fists on its third turn after raising them, but will raise them again on its fourth turn since lowering them. Turns are not counted while afflicted with Sleep or Provoke.

Bashura's Psych Up ability, which it has an even chance of using with its two regular physical attacks, alters its Strength, Defense, and Magic Defense stats up to four times; its Strength will increase by 2, while its Defense and Magic Defense are altered depending on whether or not its HP is above half at the time of use. If above half, they become 10/15/20/25; if below half, they become 3/6/9/12. This will hinder its resistance to physical attacks, but boost its resistance to magical attacks.

It occasionally drops weapons with Counterattack, useful for the Seymour Flux battle. It also drops armor with SOS Haste, which sell for a high price. 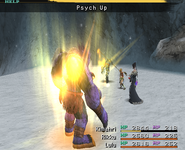 Psych Up.
Add a photo to this gallery

Retrieved from "https://finalfantasy.fandom.com/wiki/Bashura_(Final_Fantasy_X)?oldid=3364271"
Community content is available under CC-BY-SA unless otherwise noted.