Bartz's default player name is Nameless Wanderer, and his manikin counterpart is renamed Echo of a Wanderer.

Bartz's default costume is "Wind Chaser", an updated version of his default attire in previous games in the Dissidia series, which in turn is a fusion of his original Yoshitaka Amano art and in-game appearance in Final Fantasy V. Its first alternate coloration is an updated version of "White Mist Cape" attire from previous Dissidia games. The second alternate coloration is based upon an alternate Amano artwork, and gives him silver hair, a black shirt, white leggings and cape, a red shoulder spike, and a blue cloth around his waist.

Bartz's first alternate costume is "Freelancer", an updated version of his "Freelancer" attire from Dissidia 012 Final Fantasy, but with his red cape intact due to EX Mode being reworked into EX Skill. Its first alternate coloration recolors his tunic lavender, his cape blue, his pants and shirt white, and his boots black. The second recolors his tunic burgundy, his cape white, his pants black, his shirt white, and his boots brown. 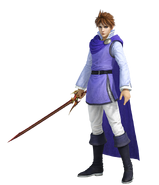 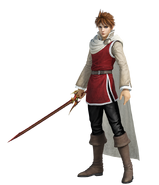 Bartz's personality remains unchanged compared to previous Dissidia titles. While annoyed for being summoned again to World B, Bartz happily reunites with Cloud and thanks the latter for remembering him. Despite his animosity for Exdeath, Bartz pushes aside his personal feelings when Materia and Spiritus come to a truce so their champions can work together to fight Shinryu, indicating a deeper level of maturity and his willingness to uphold justice.

Bartz wields multiple weapons, though he no longer mimics other characters' weapons due to his new playstyle. He equips swords, spears, bows, ninja swords, katanas, shields, and daggers. All of Bartz's weapons are grouped under "Arsenals" and can be equipped and used by the jobs in Final Fantasy V, with the exception of Arsenal IV, his third alternate arsenal, which uses weapons previously used by his Mimic playstyle from the PlayStation Portable Dissidia games.

Bartz's Arsenal I, his default weapons, includes the Brave Blade, the Holy Lance, Yoichi Bow, Sasuke's Blade, Masamune, Aegis Shield, and Assassin's Dagger. His first alternate set of weapons, Arsenal II, are mythril weapons that are silver in design. His second alternate weapons, Arsenal III, include the Greatsword, Javelin, Gale Bow, Moonring Blade, Kazekiri, Golden Shield, and Dancing Dagger. These weapons have an original, more royal design for Dissidia. His third alternate weapons set, Arsenal IV, are unique weapons from his allies, and include the Brotherhood, Holy Fang, Maria's Bow, Revolver, Eternity Blades, Lustrous Shield, and Mage Masher. His fourth alternate set of weapons, Arsenal V, are the Sealed Weapons found in Final Fantasy V. These are the Aegis Shield, Assassin's Dagger, Sasuke's Blade, Yoichi Bow, Masamune, Holy Lance and Excalibur.[1] Each of these has a slightly different design compared to the original game, thus being different in design with the same weapons from Arsenal I.

While Bartz no longer mimics others in Dissidia NT, he shares weapons with other characters. In Bartz's "Weapon Pack II", he wields the sword, shield, dagger, and spear from Firion's "Weapon Pack II", and Onion Knight's Ashura. However, they are shaped slightly differently from the original versions. 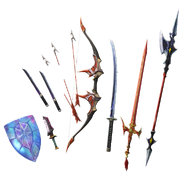 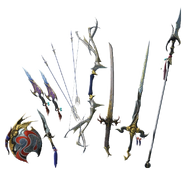 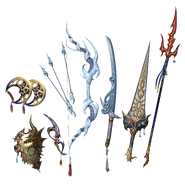 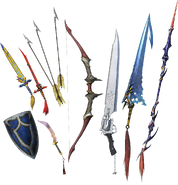 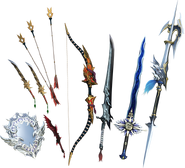 Bartz is unwittingly summoned back to World B as a champion of Materia. While facing off against Exdeath in the Interdimensional Rift, Bartz is ambushed by Sephiroth, but is saved by the timely arrival of Cloud. Bartz is confused that he can remember Cloud, prompting Cloud to remind him that his remembrance serves as evidence that a new war has started, much to Bartz's annoyance. After the two face off against their archenemies, Sephiroth and Exdeath retreat as planesgorgers begin to destroy the area, and Cloud and Bartz are sucked into a portal themselves. Bartz indirectly mentions Lenna, Faris, and Krile when he first confronts Exdeath, demanding that he let them go.

Arriving in an illusion of Eden, Bartz expresses relief that Cloud remembered him, and declares that he retains not only his memory of his home, but every cycle that he has been a part of. As they travel back to Materia's tower, Cloud briefs him on Materia's identity and the reason why they were summoned back to World B. As the pair ends up lost, they decide to wait in Alexandria for help just as Shantotto drops from another portal. Bartz is bewildered by Shantotto's identity and attitude, but is overjoyed when Cloud enlists Shantotto's assistance to return to Materia's tower.

Bartz introduces himself to the goddess, and informs her of the planesgorgers that are draining the world's battle energy. Materia asks why her champions do not simply excise them, before Shantotto steps in and opens communications with Spiritus. After being informed of the situation, the heroes and antagonists agree to stage a battle against each other to lure out Shinryu, the true cause for the loss of energy in World B.

When the Warrior of Light gives a speech about how they must join forces, Bartz tells Exdeath that it is only for the time being, to which Exdeath simply grunts and puts is hand on his sword hilt. During the fight, Bartz attacks Golbez with a lance, but Golbez deflects it and sends large rocks flying towards Squall. He assists Squall against Jecht, though he easily handles the two. Once the battle energy summons Shinryu, Bartz participates in a joint attack against the dragon, but is repelled as Shinryu reveals his true form in a potent burst of power. Once the warriors regain their composure, they work together to defeat Shinryu.

The moogles give Bartz a crystal to host his memories for Materia to use in the new cycles of wars. With a crystal doppelgänger of himself to serve on Materia's behalf, Bartz is sent home.

Type: Specialist - With wise usage of his jobs (skills), Bartz can master them in short order. For each job mastered, Bartz's attributes and abilities are enhanced.
EX Skill: Good-Luck Charm - Enhance attack potency, defense, and movement speed for each mastered job, and make remaining jobs easier to master.

FMV still of Squall and Bartz.

Bartz from the arcade tutorial. 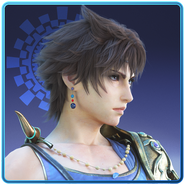 Bartz alongside the other 14 main characters.