Bartz is not seen, but Gilgamesh mentions his name after his defeat, and the party ponders who or what is Bartz.

Two it occurs two hundred years after the party saved Planet R from Exdeath, Bartz (along with Lenna, Galuf, Krile, Faris, Cid, and Mid) appears at the end. One of the OVA's protagonists, Linaly, is said to be Bartz's descendant. 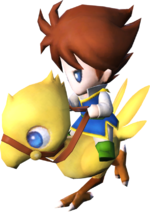 The Wind-up Bartz minion is based on his original freelancer sprite along with Boco. 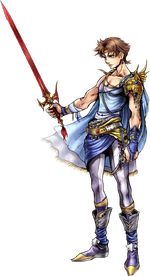 Bartz appears as a Warrior of Cosmos and stands as the hero representing Final Fantasy V, opposing Exdeath.

As a roaming adventurer traveling with Zidane, the two compete over finding a Crystal, but Bartz is captured and spends much of his storyline spying on Chaos's forces as he attempts to find his way back to Zidane. Bartz is pursued by his nemesis Exdeath, who acts with Kuja to trick him into endangering Zidane.

His alternate outfit is based on his conceptual artwork by Yoshitaka Amano, giving him white hair and a black, red and white outfit.

Bartz is confronted by Gilgamesh who has wandered into World B by chance while traveling between worlds. Wishing to have their promised rematch Gilgamesh does not realize Bartz cannot remember him, but Bartz accepts the challenge anyway.

Bartz emerges victorious, and Gilgamesh fades back into the Void. Bartz later accompanies Zidane and Squall to meet with Kuja, who is planning to betray Chaos, but the three are forced to fight him when Kuja is caught by the other Warriors of Chaos and attacks the three to save face. Bartz is incapacitated by Kain as part of the latter's plan to save his comrades from the manikins.

Bartz's third outfit is based on his Freelancer appearance, giving him a plain blue tunic with white leggings and sleeves and green boots. As a bonus downloadable fourth outfit, Bartz takes on his Dancer appearance, wearing black pants with a green sash and a red shirt opened down the front to expose his chest.

Bartz is a playable character and a representative of Final Fantasy V. His moveset is again revamped but instead of mimicking the other warriors he has a new moveset with a new set of weapons and original moves.

He is classed as a Specialist-type character, and his play style revolves around mastering a job that he uses to increase proficiency; once an attack is "Mastered", he gets a temporary buff that affects the job attack he used. By mastering all job attacks, he gets a variety of buffs.

Bartz appears as a playable character. He can be obtained in Chapter 3 and joins the side of Materia in the cutscene "From Dimensions Beyond". He can equip Sword-type weapons. His ablity "Doublehand" allows him to be Masters when used three times increasing his BRV damage, whereas "Magic Missile" lowers target’s current BRV by 1/4 with an added follow up 1-hit Melee attack.

Since he was a child, Bartz has traveled the world with his father. Even after Dorgann's premature death, Bartz continues the journey with his faithful chocobo Boko to fulfill his father's dying wish. Upon saving a princess from being attacked by monsters on his travels, he is pulled into the battle of the crystals and throws himself into the struggle for peace.

Bartz appears as a default playable character, based on his Dissidia Final Fantasy appearance. Being among the faster characters, Bartz abilities prioritize on stamina and field stages. His Limit is weaker to due to his lower Strength, but can be boosted utilizing Earth Blues, which increases his Luck in battle stages. Overall, he's a good character for both music sequences.

Bartz is a default playable character. If the player did not select him among their party of four, he can later be unlocked by collecting Red Crystal Shards.

Bartz loses several treasure boosting skills in favor of increasing the parties luck and stamina in field stages. The player can choose to boost his already solid agility, focus on restoring the team's HP, or place emphasis on supporting the Chocobo during Feature Drive. A downside is that his limit is weakened due to losing out on his ability to boost his own Luck, but otherwise, Bartz is a jack-off-all-trades hero in Field Music Sequences.

Bartz is one of the 28 default playable characters. His Limit, Master Mime, deals damage to boss-type enemies in direct proportion to Strength and Magic.

Bartz appears as a playable character.

Cosmos Bartz sprite.
Add a photo to this gallery

A young man with a strong sense of justice, rough around the edges but unable to ignore someone in distress. He travels the world to honor his father's dying wish.

Bartz is an ally and a summonable Legend. He is depicted in his default Final Fantasy V and default Dissidia outfits.

Dissidia Bartz.
Add a photo to this gallery

Flare (UR+).
Add a photo to this gallery

Flare (UUR).
Add a photo to this gallery

Final Fantasy Artniks (6).
Add a photo to this gallery

On the advice of his late father, this piano-playing youth now wanders the world.

Bartz is an exclusive character available from the Premium Character Shop as a random downloadable content. He uses the Master Mime ability during battle.

Bartz is a playable character who could be recruited during the Challenge Event Big Bridge Showdown as the First Time Reward for completing the event's stage Ronka Ruins - Interior on Classic difficulty. He has also appeared in Successors of the Dawn. 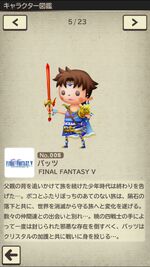 Bartz appears as a summonable vision and optional playable character. A 3-6★ Rare Summon, his job is listed as Adventurer, and his role is Physical Damage, although he has some Support abilities as well. He originally could awaken only up to 5★, but received a new form for the Final Fantasy V event The Big Bridge. His Trust Master reward is the passive ability Doublehand, which increases the equipped unit's equipment ATK by 50% and acuracy +25% when single wielding a one-handed weapon.

Bartz is a summonable champion.

He plays a fairly large role in the story. Throughout the game, he travels steadfastly with his chocobo companion, Boko. The party first encounters him on the Big Bridge, where Gilgamesh has been searching for him. The two encounter each other at various points throughout the game. Bartz and Boko also spend some time working together with Chocolatte.

Notes: Travels with a chocobo / Believes helping strangers is just what you do / Tied by fate to someone not-so-great

Road Warrior
Wherever the wind blows, there you will find Bartz and his constant companion, Boko. Sometimes treasure hunter, sometimes monster hunter, sometimes champion of justice—whatever Bartz is up to today, you know it'll be for the good of those in need. No matter how difficult the challenge, he'll solve it with style and aplomb before disappearing into the sunset.

Bartz's quest to explore the world isn't mere fancy, but rather the dying wish of his father.

Carefree
Nothing can contain Bartz's boundless enthusiasm and thirst for adventure. With a sack over his shoulder and a song in his heart, he travels from place to place, a smile on his lips as he faces even the most hopeless of situations. He can even match the ever-exuberant Rikku's excitement levels, and that's no easy feat.

Perhaps Bartz has doubts and worries like anyone else, and never lets them show. Or...maybe he really is just that carefree. But once Bartz decides to involve himself in something, he'll see it through to the end. "Never give up" is his motto, and he never has.

Gilgamesh and I
Bartz has a stalker he just can't shake, and that stalker's name is Gilgamesh. The Bartz here in Grymoire hasn't the slightest inkling why, but back in their world of origin, they have quite the history.

Although Gilgamesh is extremely irritating, he's not really a villain. In fact, a man who sticks by his creed that doggedly deserves some admiration. Of course, if you asked Bartz if he liked the guy, he'd probably just smile and say, "Absolutely can't stand him!" But here in Grymoire, Bartz and Gilgamesh could end up making a pretty good team.

Bartz is depicted in numerous cards. His cards show him in different jobs as well as his Yoshitaka Amano artworks, and Dissidia Final Fantasy artwork and renders. Most of his cards are wind-elemental though some of the job cards have other elements as well.

Trading card with Bartz riding on Boko with Lenna artwork.

Trading card with Bartz and Lenna.

Trading card with Bartz and Faris.

Trading card showing Bartz's Dissidia render in his "Dancer" outfit based on his original sprite.

Trading card of Boko and Bartz from Theatrhythm Final Fantasy.

Trading card (Time Mage).
Add a photo to this gallery

Bartz appears as an opponent and on Triple Triad cards in the version available via the Final Fantasy Portal App. On Easy he uses the rule Three Open. On Normal he uses Same and Plus. On Hard he uses All Open, Same, Plus and Chaos, and the rare five star cards of himself can be won from him. He uses the trading rule One.

Bartz and Boko from World of Final Fantasy.
Add a photo to this gallery

Bartz appeared as part of the Final Fantasy collaboration. It event that started on March 21, 2016.

Bartz appears as part of the Final Fantasy collaboration.

Bartz appears in the Dissidia Final Fantasy collaboration event as a Rank SS Yo-kai of the Mysterious Tribe.