You're my son! This is your home.

Bartholomew Estheim is Hope Estheim's father and the husband of Nora Estheim in Final Fantasy XIII. He lives in Palumpolum, works for the Sanctum, and has a fractured relationship with his son. Though he does not appear in Final Fantasy XIII-2, it is hinted he is a man of politics who founded and supports the Academy. 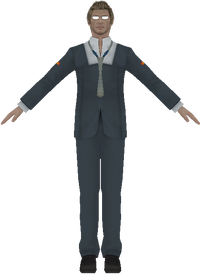 He loves both his wife and son, but is clumsy at expressing it. Things are made even more difficult by Hope's rebellious age and unreasoning resentment towards his dad.

Bartholomew has spent his days sick with worry, ever since Hope and Nora were caught up in the middle of the Purge.

Bartholomew is Hope's father, but has difficulties relating to his teenage son.

Though deeply upset by his wife's death, he sees how much Hope has grown during the subsequent events, and encourages him to find his own path and make his own decisions.

Now wanted by the Sanctum for his actions in aiding Pulse l'Cie, Bartholomew is currently under the protection of the Cavalry.

Bartholomew Estheim was originally an economist for a Sanctum-affiliated institute. Following the catastrophe, the newly formed provisional government employed him as a financial advisor, where he was instrumental in the founding of the Academy.

He is the father of Hope Estheim, the director of the New Cocoon Project.

Bartholomew is a bespectacled middle-aged man in a black suit with black pants. He wears a gray tie and and his neck is white on his suit. He has short brown hair, grey eyes and a beard.

Face to face like this, it's hard to believe you're all dangerous fugitives.

According to the Final Fantasy XIII Scenario Ultimania, Bartholomew is a calm and collected intellectual with a high position in society and an income to match.[2] He is a firm but kind man who, despite his difficulties with Hope, truly loves him and wishes the best for him. Like most of the population of Cocoon, he initially believed the Pulse l'Cie to be monsters, but was quick to change his mind and realize Lightning and company are as human as himself. He is forgiving, level-headed and a true no-nonsense man.

Bartholomew is briefly mentioned as being unable to go to Bodhum and join Nora and Hope on their ten day vacation because of a business trip, much to Hope's relief.

This is not running away. You've made a choice. You'll survive, and do what needs to be done.

From hearing the news reports of Bodhum being sealed off and everyone in the town being Purged to Pulse, Bartholomew spends days worrying about the fate of his wife and son. Burdened by the memory of his mother's death in the Purge, and his status as a Pulse l'Cie, Hope initially does not want to reach out to his father. On their journey to Eden, Hope and Lightning pass through Palumpolum, and he agrees to help her get past the PSICOM soldiers patrolling the area. Lightning convinces Hope he must tell his father everything that has happened.

After being pursued by PSICOM, Lightning's group makes its way to the Estheim Residence, where they meet Bartholomew. Bartholomew is relieved Hope is safe, and Hope tells him about Nora's death in the Purge. Grief-stricken, Bartholomew chooses to hide his son and the fellow l'Cie from the army despite his position as a Sanctum employee, and mends his relationship with Hope. When Snow apologizes for Nora's death, Bartholomew forgives him as he fulfilled Nora's final request to get Hope home.

Snow talks about his plan to save Cocoon from its corrupt fal'Cie by taking down the Sanctum, but Bartholomew says the populace's fear of the l'Cie would only worsen, causing the people to take up arms against them. PSICOM troops led by Yaag Rosch surround the house and Snow confronts them. When Cavalry troops in disguise cause chaos among the soldiers, Lightning and Hope make Bartholomew look like an unwilling accomplice to prevent him from getting Purged.

Before Hope and his friends leave with the Cavalry, Bartholomew tells his son that from now on he must choose his own path in life. Aboard the Cavalry airship Lindblum, Hope says his father was taken to a safe location by the Cavalry. Hope is reunited with him in the aftermath of Cocoon's fall as depicted in Final Fantasy XIII -Episode i-.

It still remains a question as to how much use I will be, but I will work as a member of the provisional government. However, I have some conditions.

In the six months after the Day of Ragnarok, Palumpolum has become the new capital of Cocoon and the military base of operations. Bartholomew is summoned by Cavalry Captain Rygdea to a secret meeting in the city's historic concert hall. Rygdea shows Bartholomew an ID card containing internal documents from the Sanctum made by the late Yaag Rosch with his voice-over providing insight to what happened behind the scenes within the Sanctum from his perspective.

The card shows the security footage from the day of the incident at Euride Gorge, depicting the Pulse l'Cie responsible: Fang and Vanille. Watching the footage of PSICOM carrying out the Purge and imagining what Hope and Nora went through, Bartholomew regrets not going to Bodhum with them, believing it to be his punishment for ignoring his family.

Watching the rest of the footage Bartholomew feels sorry for how Hope was forced to grow up quickly, lamenting how he wasn't there for his son. He learns the l'Cie were unknowingly being helped by the fal'Cie who were using them to destroy Cocoon and sacrifice its inhabitants to bring back the Maker. Bartholomew recalls the absurdity of the truth that the fal'Cie the people of Cocoon saw as gods for centuries sought out a god themselves at the cost of innocent lives like Nora.

Rygdea tells Bartholomew of how people had forgotten PSICOM's last act of heroism in helping evacuate the populace before Cocoon's fall, as they are now seen as evil personified. The former members of the Sanctum pushed the blame for the Siege of Eden on PSICOM for their own profit. Rygdea reveals his plan of using the ID card's footage to expose the truth behind the Purge and everything else that led to Cocoon's fall, so the former Sanctum members will be held responsible.

Bartholomew asks Rygdea what he plans to replace the remnants of the Sanctum with once they are removed from power. Rygdea wishes to create a society where the people think and live for themselves, free of the fal'Cie. By releasing Rosch's documents, Rygdea hopes to clear the reputations of the former Pulse l'Cie. Rygdea asks Bartholomew to join the new provisional government and put his influence in the political and business worlds to good use. After remembering past words of encouragement from Nora, Bartholomew accepts Rygdea's offer.

As his condition, Bartholomew says he wants to build a public research institute that will publicize its findings without interference from the government, so people's animosity towards Pulse will vanish and nothing like the Purge will happen again. He wants to form a higher education parallel to the institute for children like Hope. They shake hands and seal the agreement.

As congresspeople gather in the hall for an assembly, Rygdea prepares to release the secret information as Bartholomew watches from inside the storage room. The congresspeople are in denial about the confidential information and Rosch's footage, and Rygdea summons the Palumpolum Security Regiment to arrest everyone for approving of the Purge and conspiring to massacre the people in Bodhum; thus keeping his promise of removing them from power without bloodshed. Bartholomew leaves the building as a founder of the Academy.

The Final Fantasy XIII-2 Ultimania Omega reveals Bartholomew retired in 10 AF. He died between 10 and 13 AF, as Hope reveals this to Serah and Noel, when explaining there was nothing left in his original time before he entered his time capsule to reach Academia 4XX AF.

After being freed from Bhunivelze's control, Hope sees the spirits of his parents, Bartholomew and Nora, offering him the chance to reunite with them in the new world. Hope rejects the offer to save Lightning.

Bartholomew appears in the trading card game with a Wind-elemental card.

Like Rygdea, Bartholomew is a head swap; various non-player characters in Nautilus and Eden wear the same clothes as he does.

He is voiced by André Sogliuzzo who also voices Zuke from Final Fantasy X.