Even if we believe different things, I'll always feel the same about her. The time of the summoners may have passed, but I will always be Dona's guardian. I live only to protect her!

Barthello has short brown hair, half-closed eyes and a square-shaped face. He is tall and muscular, wearing two brown belts adorned with iron buttons on his chest and Yakuza-style bandages around his abdomen. He wears baggy light blue three-quarter length trousers with a green belt, and blue sandals with criss-crossing arm wraps of the same color.

During Final Fantasy X he speaks little, often just nodding in response to what Dona says or silently responding to her orders, but when he does speak, he has something significant to say. He appears at first to be intimidating and thuggish, but in truth he is highly loyal and dutiful, desiring nothing but to protect his summoner. In Final Fantasy X-2 Barthello is much more interactive, though dejected and torn between his beliefs and his feelings for Dona.

Barthello is the only guardian to summoner Dona. At first silent, he suddenly starts talking when he meets Auron, claiming the legendary guardian was the reason he decided to become one. Whenever he is around Auron, Barthello becomes giddy, unable to contain his excitement.

When Dona is kidnapped by the Al Bhed, Barthello starts doubting his abilities as a guardian. Auron gives him advice and he is able to continue his duties. Barthello eventually finds Dona and, depending on the player's choices, the two either continue their pilgrimage or give up on it.

Two years after the beginning of the Eternal Calm, Barthello is living with Dona in Kilika and is a member of New Yevon. Due to Dona's allegiance to the Youth League and the growing unrest between the two factions, they have split by the time Yuna encounters them.

Barthello is living at Kilika Temple, with the other believers. When fiends start coming out of the temple, Barthello is one of the people responsible with keeping them inside. He is injured, but receives help from the Gullwings. Despite his split with Dona, he claims to the Gullwings that he will always be Dona's guardian, and lives only to protect her.

By completing several optional missions in Kilika, the couple will be reunited in a scene at the steps of Kilika Temple. If not, they will be 'reunited' in the village, though with Dona not letting Barthello in the house. 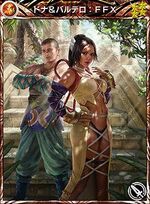