Barrier Shift changes the user's elemental weakness and allows them to absorb all other elemental attacks. It is used only by Amon and Hein.

Barrier Shift is an attack exclusive to the 3D versions used by Golbez. It gives him a random elemental weakness and enables him to absorb all other elements.

Barrier Change is used by the boss of Palom's Challenge Dungeon, the Blade Dragon. It gives the Blade Dragon a weakness to one element, resistance to another, and allows it to absorb the third (for the main three elements, fire, ice and thunder).

Barrier Change (called Wall Change in some translations) is used by Melusine, and Omega Mk.II, which allows them to change their elemental weakness at will.

Barrier Change (originally called Wall Change) is a special ability of several bosses, most notably Kaiser Dragon and Magic Master. It allows the user to be weak to one element, absorb another element, and nullify the damage of all other elements.

Barrier Shift is an ability of the boss Hell House. It allows it to change its elemental affinity to

Elemental Shift is used exclusively by Greater Sphere and Spherimorph. It allows the user to change their elemental weakness, as well as other elemental attributes to match the weakness, when they take damage.

Barrier Shift is used by Amorphous Gel and Protean Gel and allows them to change their elemental weaknesses.

Shift is an enemy technick that grants the augment Shift. It is used by Phoenix, Zodiark, and Trickster.

Shift is an enemy augment that sets a single element as a weakness while absorbing all other elements and changes the elemental weakness when attacked with weak element. It is used by Phoenix, Zodiark, Trickster, Shemhazai, Omega Mark XII, and Bull Chocobo.

Barrier Shift is the ability of Rubicante's card. Barrier Shift requires one Fire CP and the discard of another Rubicante card to activate, and allows the player to choose an element. For the rest of the turn, Rubicante cannot be targeted by the effects of cards of that element.

Number 024's card is able to use an ability that emulates Barrier Shift. For the cost of one Light CP, the player can choose an element to prevent Number 024 from being selected by cards of that element for the rest of the turn. 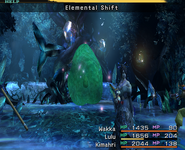 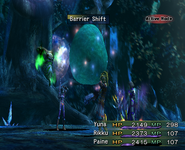