Raises a barrier to defend against special attacks.

Barrier (バリア, Baria?) is a recurring supportive spell from the Final Fantasy series. An upgrade for Barrier exists in the form of Barriera.

Barrier is a White Magic spell that can be cast on one or all allies. When cast on a target, that unit gains resistance to various elements. The spell's success rate and effectiveness at reducing damage increases as it levels up. Any character can learn Barrier by having them use the Barrier Tome (Barrier Scroll in Origins).

The following is a list of resistances granted by Barrier at each level in.

In the original Famicom version, the resistance were listed backwards (for example, level one Barrier would claim to give the level eight resistance) but the effects were identical to other versions, except for a minor bug, where at level 8, the spell would not grant protection against Ice.

The Emperor in the first battle is able to cast Barrier VIII.

Barrier appears as Odin's "White" ability in the Famicom version. When used, it grants the Reflect status to all members of the player party, but has 50% accuracy to grant the effect on each individual party member. The spell was replaced with the more powerful Protective Light in the 3D and Pixel Remaster versions, which grants Reflect to all allies with 100% accuracy.

Barrier is learned by equipping a Barrier Materia and costs 16 MP to cast. It bestows the Barrier status that halves physical damage for a duration, making it akin to the Protect spell from the rest of the series.

The Barrier Materia can be bought from Rocket Town for 10,000 gil. The enemies Dark Nation, Death Claw, Adamantaimai, and the boss Gorkii all use the spell against the player.

Barrier is the first ability of

Barrier Materia, costing 11 MP to cast. It halves all physical damage to one ally for a period of time.

Barrier is the only defensive non-elemental Magic Materia.

This section about a spell in Before Crisis -Final Fantasy VII- is empty or needs to be expanded. You can help the Final Fantasy Wiki by expanding it.

Barrier costs 16 MP to cast and grants the status of the same name. The Barrier Materia can be purchased from the Happy Turtle shop for 4,000 gil.

Barrier is the unique ability of Yuna's Floral Fallal special dressphere, learned for 20 AP, and costs 36 MP to cast. It nullifies all magic damage done to Yuna herself, but not to the Pistils.

Barrier is an enemy ability used by the Garuda Interceptor boss. It makes the boss resistant to both physical and magical damage.

Barrier is an high-rank Red Magic spell for the Red Mage that bestows the target both the Shell and Protect status effects. It costs 10 MP to cast, has a range of 3, and can be Stolen through the ability Steal: Ability. Barrier cannot be reflected. It can be learned from the Mage Masher for 300 AP.

Barrier is an ability that bestows Protect and Shell in an area. It learned learned by the Bishop from the Pomegranate Staff for 200 AP. It costs 8 MP to cast and can target allies from three spaces away.

Barrier was the ability of the Green Mage unit. The ability raised the physical and magic defense of all allies in a cross shaped area.

Barrier is an ability that has 5 uses and raises the party's Def by 10 in battle.

Barrier is an ability exclusive to Xagor, and halves all damage from all weapons except for the Mystic Swords.

This section about a spell in Final Fantasy Crystal Chronicles: Ring of Fates is empty or needs to be expanded. You can help the Final Fantasy Wiki by expanding it.

The Barrier spell is cast by stacking one Fire and one Clear. It affects a small area.

Create a barrier with durability equivalent to your maximum AP. Nullifies all damage until durability drops to 0.

Barrier is unique to the Black Mage job, and can only be cast on oneself. It costs 300 AP and has a cooldown time of 60 seconds. The amount of damage nullified is equal to the caster's maximum AP, so using equipment traits to boost max AP can be useful for Black Mages. The Barrier will disappear after a set time, even if its durability hasn't been reduced to zero.

Barrier is a special ability which comes equipped on White Mage but can be used by any racer; once in effect, it will nullify the effect of any spell targeting the character, as well as a couple of other special abilities. If nothing targets the racer after its activation, it will eventually wear off. 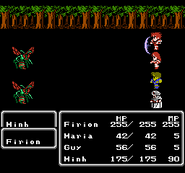 Barrier cast on the party in Final Fantasy II (PS).

Barrier cast on the party in Final Fantasy (GBA).

Barrier cast on the party in Final Fantasy II (PSP). 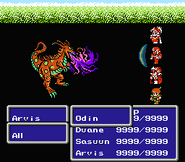 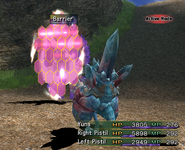 This gallery is incomplete and requires Before Crisis -Final Fantasy VII-, Final Fantasy X-2 (PS3) and The Final Fantasy Legend added. You can help the Final Fantasy Wiki by uploading images.
White Magic
Community content is available under CC-BY-SA unless otherwise noted.
Advertisement