The Barriers are boss enemies in Final Fantasy V. They accompany Necrophobe and as long as even one is still around, Necrophobe cannot be targeted for spells or attacks.

The Barriers are quick and relentless with their attacks. They use powerful spells like Flare and Holy, which they reflect off themselves to take down the player's party.

The quickest way to deal with the barriers is to have a Summoner cast Bahamut. If the player went out of their way to get the Mime job, they can speed up the process. Whenever the barriers attack, the party's White Mage should heal everyone. Once the barriers are gone, Necrophobe should not take too long to defeat. 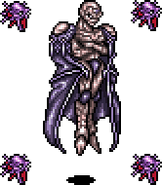 Necrophobe surrounded by Barriers.
Add a photo to this gallery

Retrieved from "https://finalfantasy.fandom.com/wiki/Barrier_(Final_Fantasy_V_boss)?oldid=3238275"
Community content is available under CC-BY-SA unless otherwise noted.